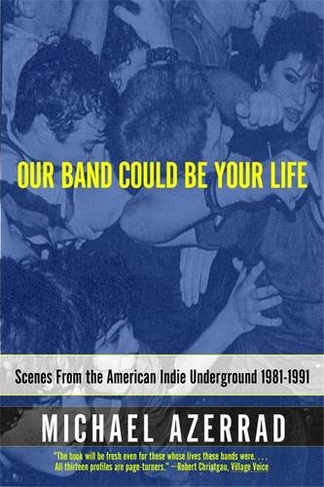 By Michael Azerrad (Author)
Paperback
https://www.whsmith.co.uk/products/our-band-could-be-your-life-scenes-from-the-american-indie-underground/michael-azerrad/paperback/9780316787536-01-000.html £10.65 rrp £12.99 Save £2.34 (18%)
GBP
Availability
Currently unavailable. We don't know when or if this item will be back in stock
Share

Finally in paperback, the story of the musical revolution that happened right under the nose of the Reagan Eighties - when a small but sprawling network of bands, labels, fanzines, radio stations and other subversives re-energised American rock with punk rock's d-I-y credo and created music that was deeply personal, often brilliant, always challenging and immensely influential. OUR BAND COULD BE YOUR LIFE is a sweeping chronicle of music, politics, drugs, fear, loathing and faith that is already being recognized as an indie rock classic in its own right. Among the legendary bands featured are: Black Flag, the Minutement, Mission of Burma, Minor Threat, Husker Du, the Replacements, Sonic Youth, Butthole Surfers, Big Black, Dinosaur Jr., Fugazi, Mudhoney and Beat Happening.

Michael Azerrad has written for a number of magazines inc. Rolling Stone, revolver and Spin as well a book about Nirvana and another featuring the Seattle music scene. He lives in New York.