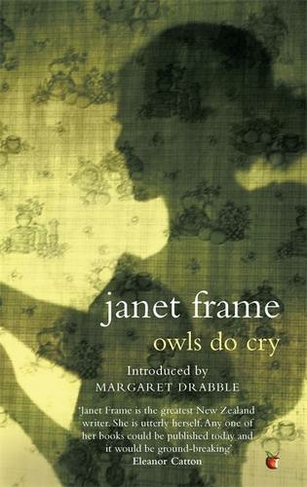 By Janet Frame (Author), Margaret Drabble (Contributor)
Paperback
https://www.whsmith.co.uk/products/owls-do-cry-virago-modern-classics/janet-frame/margaret-drabble/paperback/9780349006673-12-000.html £7.37 rrp £8.99 Save £1.62 (18%)
GBP
Availability
In Stock
Free Delivery Available When You Spend £25 Or More
Details
Spend £25 On Products To Receive Free Standard Delivery To Your Home Or Free Next Working Day Click And Collect To Store

Owls Do Cry is the story of the Withers family: Francie, soon to leave school to start work at the woollen mills; Toby, whose days are marred by the velvet cloak of epilepsy; Chicks, the baby of the family; and Daphne, whose rich, poetic imagination condemns her to a life in institutions. 'Janet Frame's first full-length work of fiction, Owls Do Cry, is an exhilarating and dazzling prelude to her long and successful career. She was to write in several modes, publishing poems, short stories, fables and volumes of autobiography, as well as other novels of varied degrees of formal complexity, but Owls Do Cry remains unique in her oeuvre. It has the freshness and fierceness of a mingled cry of joy and pain. Its evocation of childhood recalls Blake's Songs of Innocence and of Experience, as well as the otherworldly Shakespearean lyric of her title and epigraph, but her handling of her dark material is wholly original' Margaret Drabble

Janet Frame (1924-2004) was one of New Zealand's most distinguished writers. She is best known for her autobiography, which inspired Jane Campion's internationally acclaimed film, An Angel at My Table. Michael Holroyd hailed it as 'one of the greatest autobiographies written in the twentieth century'. She was also the author of twelve novels, five collections of short stories, two volumes of poetry and a children's book.Throughout her long career Janet Frame received a wide range of awards. They included every literary prize for which she was eligible in New Zealand, honorary membership of the American Academy of Arts and Letters, and the Commonwealth prize for literature. She also won civil honours - a CBE in 1983 for services to literature, the Order of New Zealand in 1990 - and honorary doctorates and medals from three New Zealand universities.