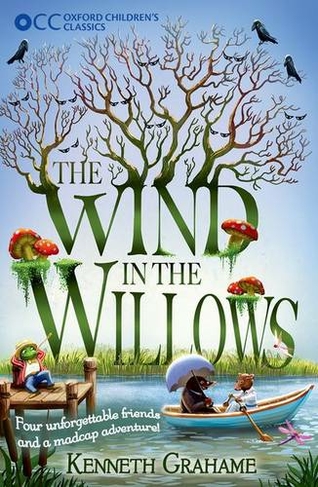 Oxford Children's Classics: The Wind in the Willows

What are you looking for? Adventure! Excitement! Fun! Friendship! Join in the delights and disasters on the riverbank with Mole and his new friends. With sensible Ratty, wise Badger, fun-loving Toad, and the dastardly stoats and weasles, there's never a dull moment! Oxford Children's Classics present not only the original and unabridged story of The Wind in the Willows in a stunning new edition, but also help you to discover a whole world of new adventures with a vast assortment of recommendations and activities.

Kenneth Grahame was born in Scotland in 1859. After the death of his mother he was sent to live with his grandparents in Berkshire, in a house by the River Thames, and attended school in Oxford. On leaving school he worked at the Bank of England during the day and also wrote articles, stories, and poems, which he submitted to many publications. He married in 1899 and had a son, Alastair. The Wind in the Willows was originally a story for Alastair, and was spoken aloud as short stories. Only after that did Grahame put them into one book which was published in 1908. He died in 1932 and is buried in Oxford.