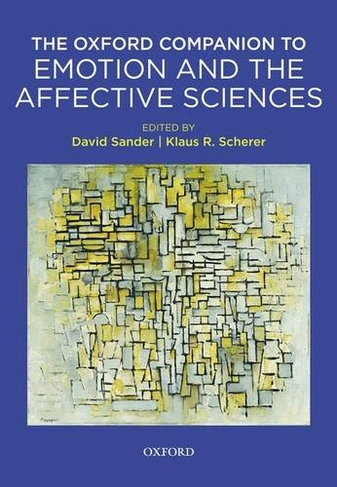 Oxford Companion to Emotion and the Affective Sciences

Few areas have witnessed the type of growth we have seen in the affective sciences in the past decades. Across psychology, philosophy, economics, and neuroscience, there has been an explosion of interest in the topic of emotion and affect. Comprehensive, authoritative, up-to-date, and easy-to-use, the new Oxford Companion to Emotion and the Affective Sciences is an indispensable resource for all who wish to find out about theories, concepts, methods, and research findings in this rapidly growing interdisciplinary field - one that brings together, amongst others, psychologists, neuroscientists, social scientists, philosophers, and historians. Organized by alphabetical entries, and presenting brief definitions, concise overviews, and encyclopaedic articles (all with extensive references to relevant publications), this Companion lends itself to casual browsing by non-specialists interested in the fascinating phenomena of emotions, moods, affect disorders, and personality as well as to focused search for pertinent information by students and established scholars in the field. Not only does the book provide entries on affective phenomena, but also on their neural underpinnings, their cognitive antecedents and the associated responses in physiological systems, facial, vocal, and bodily expressions, and action tendencies. Numerous entries also consider the role of emotion in society and social behavior, as well as in cognitive processes such as those critical for perception, attention, memory, judgement and decision-making. The volume has been edited by a group of internationally leading authorities in the respective disciplines consisting of two editors (David Sander and Klaus Scherer) as well as group of 11 associate editors (John T. Cacioppo, Tim Dalgleish, Robert Dantzer, Richard J. Davidson, Ronald B. de Sousa, Phoebe C. Ellsworth, Nico Frijda, George Loewenstein, Paula M. Niedenthal, Peter Salovey, and Richard A. Shweder). The members of the editorial board have commissioned and reviewed contributions from major experts on specific topics. In addition to comprehensive coverage of technical terms and fundamental issues, the volume also highlights current debates that inform the ongoing research process. In addition, the Companion contains a wealth of material on the role of emotion in applied domains such as economic behaviour, music and arts, work and organizational behaviour, family interactions and group dynamics, religion, law and justice, and societal change. Highly accessible and wide-ranging, this book is a vital resource for scientists, students, and professionals eager to obtain a rapid, conclusive overview on central terms and topics and anyone wanting to learn more about the mechanisms underlying the emotions dominating many aspects of our lives. 50 black & white figures, 16 black & white photos and 5 colour photos