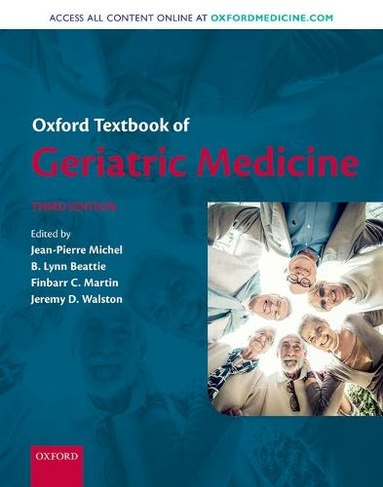 Also available on eBook for £218.87. Click here to purchase from Rakuten Kobo

Over the past two decades there has been a marked change in global age demographics, with the number of over-60s increasing by 82% and the number of centenarians by 715%. This new-found longevity is testament to the success of recent advances in medicine, but poses significant challenges to multiple areas of health care concerning older patients. Building upon its predecessor's reputation as the definitive resource on the subject, this new edition of the Oxford Textbook of Geriatric Medicine offers a comprehensive and multinational examination of the field. Fully revised to reflect the current state of geriatric medicine, it examines the medical and scientific basis of clinical issues, as well as the ethical, legal, and socio-economic concerns for healthcare policy and systems. Over 170 chapters are broken up into 16 key sections, covering topics ranging from policy and key concepts through to infection, cancer, palliative medicine, and healthy ageing. New material includes focus on the evolving concepts of malnutrition, sarcopenia, frailty, and related geriatric syndromes and integration of geriatric principles from public health, primary and specialized care, and transitional stages from home to emergency, medicine and surgery, rehabilitation, and long term care. The Oxford Textbook of Geriatric Medicine brings together specialists from across the globe to provide every physician involved in the care of older patients with a comprehensive resource on all the clinical problems they are likely to encounter, as well as on related psychological, philosophical, and social issues.

Dr Michel is Emeritus Professor of Medicine, former head of the academic Geriatric Department, Geneva University, and honorary professor in France, China and Quebec. He co-founded the European, Middle-East, Latin-America and Asian Academy for Medicine of Ageing and the European Interdisciplinary Council on Ageing. He is past President of the European Union Geriatric Medicine Society and editor-in-chief of European Geriatric Medicine.Dr Michel is also a full board member of the French Academy of Medicine and has received an IAGG World Award for his life-time and global achievements in Geriatrics. He is an ongoing World Health Organization expert for the 'Aging and Life course' program, and contributed to the 1st WHO report on Healthy Ageing in 2015. He has also authored 430 peer reviewed papers and numerous book chapters.B Lynn Beattie is Professor Emeritus, Division of Geriatric Medicine, Department of Medicine, UBC. Her current clinical interest is practise at the UBC Hospital Clinic for Alzheimer Disease and Related Disorders (UBCH CARD) where she is the Medical Director. She is on the Board of the Alzheimer Society of Canada as Chair of the Research Policy Committee and has completed two terms as Secretary Treasurer of C5R, the Consortium of Canadian Centres for Clinical Cognitive Research. ProfessorBeattie also started and was the first Head of the Division of Geriatric Medicine at UBC, initially based at Shaughnessy Hospital and in later years at Vancouver Coastal UBC/VGH. She was Director of the Clinic for Alzheimer's Disease and Related Disorders from its inception until 2005, and again from 2009to date, and is Past President of the American Geriatrics Society and the Canadian Geriatrics Society.Professor Finbarr C. Martin trained in geriatric medicine at Hammersmith Hospital, London, and was appointed consultant physician in general and geriatric medicine at St Thomas' Hospital in 1984. He has worked in a broad range of services for older people in acute hospitals and in community settings. He has led national audit programmes on falls and fragility fractures, and is co-chair of the DH funded but clinically led National Hip Fracture Database. He was the elected president of theBritish Geriatrics Society between 2010 and 2012.Dr Jeremy Walston is a professor of medicine at the Johns Hopkins University School of Medicine. His area of clinical expertise is geriatric medicine. At the Johns Hopkins School of Medicine, Dr Walston is co-director of the Biology of Healthy Aging Program in the Division of Geriatric Medicine and Gerontology as well as deputy director of the division, and the Raymond and Anna Lublin Professor of Geriatric Medicine. Dr Walston plays a leading role in setting the national ageing research agendathrough his leadership and participation in committees of the American Geriatrics Society and on study sections and review panels for the National Institute on Aging. He has won numerous awards for his research, including the American Geriatrics Society New Investigator Award, a Brookdale NationalLeadership Fellowship and Paul Beeson Physician Faculty Scholars recognition.