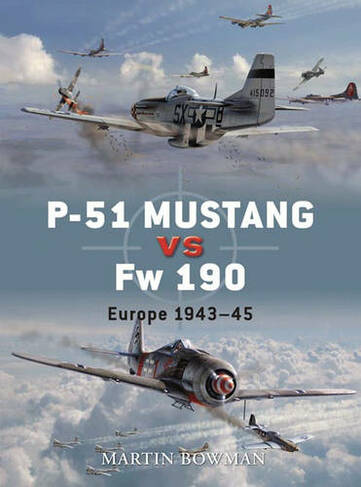 Discover the history of a classic duel as the finest American and German pilots were pitted against each other in the war-torn skies over Europe. The P-51 personified the might of the Eighth Air Force's fighter strength in the latter years of World War II. Their opposition were the pilots of the Fw 190 committed to the final, frontline defence of the Reich. Commonly known by its adversaries as the 'Butcher Bird', the Fw 190 was the scourge of its enemies, superior to all Allied fighters until the introduction of the P-51. Relive the thrill and terror of a dogfight as these two evenly matched opponents battled for supremacy. Illustrations (some col.)

Martin Bowman has also written more than a dozen titles on the "Mighty Eighth" over the past 20 years including three highly-successful volumes in Osprey's Combat Aircraft series. Having interviewed many veterans over the years, he is the perfect author to describe the experiences of both Axis and Allied pilots. The author lives in Norwich, UK.