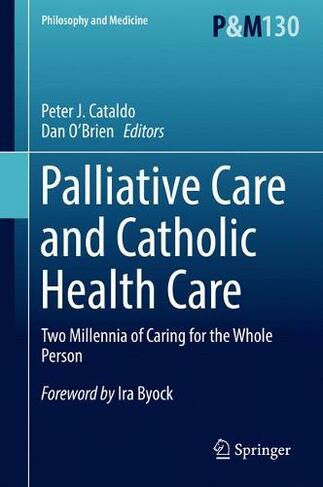 This book offers a comprehensive overview of the compatibility of palliative care with the vision of human dignity in the Catholic moral and theological traditions. The unique value of this book is that it presents expert analysis of the major domains of palliative care and how they are compatible with, and enhanced by, the holistic vision of the human person in Catholic health care. This volume will serve as a critically important ethical and theological resource on palliative care, including care at the end of life, for bioethicists, theologians, palliative care specialists, other health care professionals, Catholic health care sponsors, health care administrators and executives, clergy, and students. Patients receiving palliative care and their families will also find this book to be a clarifying and reassuring resource. 2 Illustrations, color; 3 Illustrations, black and white; XVI, 282 p. 5 illus., 2 illus. in color.

Peter J. Cataldo is Senior Vice President, Theology and Ethics for Providence St. Joseph Health. Prior to his current position, he worked as the Chief Healthcare Ethicist for the Archdiocese of Boston, where he provided ethics services for the Archdiocese and the Steward Health Care System. Dr. Cataldo was also an ethicist with The National Catholic Bioethics Center and taught philosophy on the college level. His publications include his edited books (with Albert S. Moraczewski, O.P.), Catholic Health Care Ethics: A Manual for Ethics Committees and The Fetal Tissue Issue: Medical and Ethical Aspects. Dr. Cataldo has lectured and consulted extensively in the areas of bioethics, clinical ethics, and health care partnerships. He holds a B.A. in Philosophy and a Certificate of Study in Soviet Studies from Saint Anselm College, and a M.A. and Ph.D. in Philosophy from Saint Louis University. Dr. Cataldo is the 2013 recipient of The Father Lawrence G. Dunklee Excellence in Ethics Award. For more than twenty-five years, Dr. Cataldo has contributed to the ethical and theological dialogue in the Catholic Church regarding critical issues in bioethics. Dr. Cataldo's work has focused especially on the topics of reproductive technologies, high-risk pregnancies, life-sustaining treatment, and institutional collaboration between Catholic and other-than-Catholic health care providers. In addition to the ethics of palliative care, his current research interests include the principle of cooperation in wrongdoing as developed in the Catholic moral tradition and the application of this principle to a range of issues affecting Catholic social services.Dan O'Brien is the Senior Vice President, Ethics, Discernment and Church Relations for Ascension. In this position, he serves as the executive lead for the Ethics Center of Expertise within Mission Integration, which serves Ascension's national health ministry. He holds a B.A. in philosophy from Regis University, an M.A. in systematic theology from the Aquinas Institute of Theology in St. Louis, and a Ph.D. in interdisciplinary healthcare ethics from Saint Louis University. He also studied scripture, sacramental and moral theology, canon law and spirituality at the Pontifical University of St. Thomas (the Angelicum) and the Accademia Alfonsiana, both in Rome, Italy, in 1988-89. He has had numerous speaking engagements in palliative care, moral theology and health care ethics, for national and international audiences, and has almost 60 publications. Dr. O'Brien is responsible for providing ethics and theological leadership, analysis and guidance for Executive Leadership and management throughout Ascension and its subsidiaries, in support of the strategic decisions that promote the fulfillment of Ascension's Mission, Vision, Values and identity as a ministry of the Catholic Church. He also fosters positive working relationships between leaders of the Roman Catholic Church and Ascension's executive leadership community. His current research interests include the impact of scripture and metaphor on moral imagination, the ethics of palliative care, spirituality, organizational ethics discernment and the ethics of institutional cooperation in partnerships. Dan is also an accomplished sculptor.