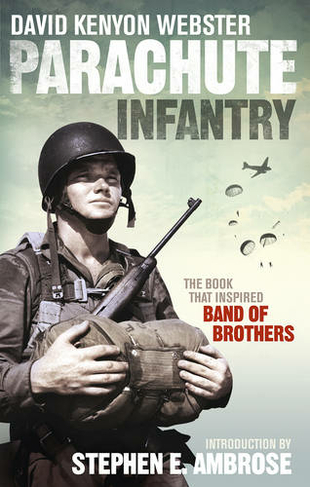 Parachute Infantry: The book that inspired Band of Brothers

Paratrooper David Kenyon Webster jumped into the chaos of occupied Europe on D-Day, fighting his way through Holland and finally capturing Hitler's Eagle's Nest. He was the only member of Easy Company to write down his experiences as soon as he came home from war. Webster records with visceral and sometimes brutal detail what it is like to take a bullet in the leg, to fight pitched battles capturing enemy towns, and to endure long periods of boredom punctuated by sudden moments of terror. But most of all, Parachute Infantry shows how a group of comrades entered the furnace of war and came out brothers.

David Kenyon Webster left Harvard to join the paratroopers, training at Camp Toccoa, Georgia. He could have used the influence of his wealthy family to land a comfortable desk job, but he was determined to do his duty and to see the war from the point of view of an ordinary soldier. He parachuted into Normandy the night before the D-Day landings and later into Holland as part of Operation Market Garden, going on to participate in the capture of Hitler's Eagle's Nest at the end of the war. After the war Webster worked as a journalist. On 9 September 1961, he went missing while shark fishing off the coast of California. His body was not found. His memoir remained unpublished until Stephen Ambrose discovered it, using it as a key source for his book Band of Brothers and later the series. It was Ambrose's championing of the work that led to its eventual publication.