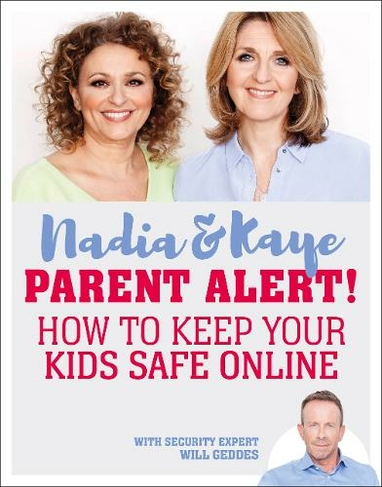 Parent Alert How To Keep Your Kids Safe Online

By Will Geddes (Author), Nadia Sawalha (Author), Kaye Adams (Author)
Hardback
https://www.whsmith.co.uk/products/parent-alert-how-to-keep-your-kids-safe-online/will-geddes/nadia-sawalha/paperback/9780241350706-12-000.html £12.79 rrp £15.99 Save £3.20 (20%)
GBP
Availability
In Stock
Free Delivery Available When You Spend £25 Or More
Details
Spend £25 On Products To Receive Free Standard Delivery To Your Home Or Free Next Working Day Click And Collect To Store
Share

Act now and get savvy to ensure your kids can enjoy the best of the internet and social media - without the risks. This practical go-to guide explains all the digital dangers kids face when they visit chat rooms, share selfies, use apps, and explore the internet. Worried about what their own teenagers get up to, best friends Nadia Sawalha and Kaye Adams team up with international security expert Will Geddes. They ask the questions, and Will gives the answers, with simple action plans, preventative steps, and advice on how to recognise the warning signs. Your child's experiences online can potentially impact them for many years to come. Learn how to avoid internet dangers and help them stay safe online.

Best friends and television presenters Nadia Sawalha and Kaye Adams are well-known for being panellists on the long-running ITV daytime chat show Loose Women. They are both parents, each with two girls between 10 and 15 years old. Together, the pair host their own YouTube channel, Nadia & Kaye, where they vlog about a range of subjects. In July 2017, Nadia's daughter told her about the Snap Map function on Snapchat, which reveals the current physical location of the user's friends on the app. Alarmed at the potential dangers this caused children using Snapchat (which they, as parents, had no idea about), Nadia and Kaye posted their "Parent Alert!" vlog highlighting the app and its dangers. The vlog has been viewed more than 28 million times on Facebook since it was uploaded. Nadia originally rose to fame as an actress, appearing as Annie Palmer in the BBC's EastEnders, and later went on to win Celebrity MasterChef in 2007. Kaye, meanwhile, is a highly respected journalist, having made her name reporting current affairs for ITV and STV, and with a daily current affairs programme on BBC Scotland, The Kaye Adams Programme.With over 25 years' experience, Will Geddes is recognised as a leading specialist security advisor. Beginning his professional career in Human Threat Management (HTM), Will has been strategically and tactically involved in cybersecurity, protection of children and minors, counterterrorism and counter-extremism, extortion management, emergency extractions, intelligence gathering, and investigations. He has operated across the world, including in hostile and high-risk environments, such as Iraq, Afghanistan, and Syria. Will has worked for royal families, former Heads of State, and Hollywood celebrities, as well as FTSE 100 and Fortune 500 companies. He is also a regular keynote speaker and an advisor to The International Press & Media Group.