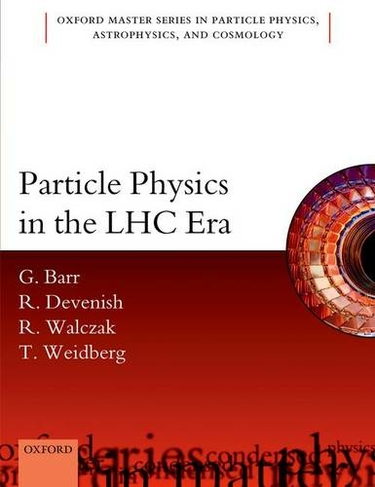 Particle Physics in the LHC Era 24

This text gives an introduction to particle physics at a level accessible to advanced undergraduate students. It is based on lectures given to 4th year physics students over a number of years, and reflects the feedback from the students. The aim is to explain the theoretical and experimental basis of the Standard Model (SM) of Particle Physics with the simplest mathematical treatment possible. All the experimental discoveries that led to the understanding of the SM relied on particle detectors and most of them required advanced particle accelerators. A unique feature of this book is that it gives a serious introduction to the fundamental accelerator and detector physics, which is currently only available in advanced graduate textbooks. The mathematical tools that are required such as group theory are covered in one chapter. A modern treatment of the Dirac equation is given in which the free particle Dirac equation is seen as being equivalent to the Lorentz transformation. The idea of generating the SM interactions from fundamental gauge symmetries is explained. The core of the book covers the SM. The tools developed are used to explain its theoretical basis and a clear discussion is given of the critical experimental evidence which underpins it. A thorough account is given of quark flavour and neutrino oscillations based on published experimental results, including some from running experiments. A simple introduction to the Higgs sector of the SM is given. This explains the key idea of how spontaneous symmetry breaking can generate particle masses without violating the underlying gauge symmetry. A key feature of this book is that it gives an accessible explanation of the discovery of the Higgs boson, including the advanced statistical techniques required. The final chapter gives an introduction to LHC physics beyond the standard model and the techniques used in searches for new physics. There is an outline of the shortcomings of the SM and a discussion of possible solutions and future experiments to resolve these outstanding questions. For updates, new results, useful links as well as corrections to errata in this book, please see the book website maintained by the authors: https://pplhcera.physics.ox.ac.uk/

Robin Devenish studied mathematics and physics at the University of Cambridge. After post-doctoral positions at Lancaster University and University College London, he joined the DESY laboratory in Hamburg in 1973. At DESY he worked on electron-positron annihilation physics with the PLUTO experiment on the DORIS and PETRA colliders. In 1979 he joined the Physics Department at Oxford University, continuing to work on e+e- physics at DESY, but now with the TASSOexperiment. He was a founder member of the Oxford team that joined the ZEUS experiment at the electron-proton collider HERA (also at DESY). His work at HERA focused on using deep-inelastic scattering to probe experimental aspects of quantum chromodynamics. With Amanda Cooper-Sarkar he wrote the definitivetext on `Deep-Inelastic Scattering' (OUP 2004).Tony Weidberg did a PhD at the University of Cambridge and then worked from 1982-1989 at CERN on the UA2 experiment at the CERN antiproton-proton collider. He worked on the discovery of the W and Z bosons and on the development of a novel scintillating fibre detector. He moved to Oxford in 1989 to work on silicon detector R&D for the LHC. He was a founding member of the ATLAS collaboration and jointly leads the Oxford ATLAS group which has become one of the largest university groups inATLAS. He worked on the R&D for electrical and optical services for the ATLAS SemiConductor Tracker (SCT) and was responsible for the production and QA/QC for these subsystems. He worked on the analysis of some of the Standard Model measurements at the LHC.Giles Barr did his undergraduate degree in physics at the University of Oxford and continued at Oxford as a graduate student working on underground detector physics at the Soudan-2 experiment. There, he worked with Tom Gaisser and Todor Stanev on calculating the fluxes of neutrinos produced by cosmic rays in the atmosphere. After obtaining his doctorate in 1988, he moved to the CERN laboratory in Geneva to work on the direct CP violation search experiment NA31. After becoming a researchscientist at CERN, he moved to the NA48 experiment, which further studied the phenomenon of direct CP violation in kaons. In 2000, he joined the faculty at the University of Oxford and moved back to neutrino physics, working first on the MINOS and then the T2K long-baseline neutrino experiments. He iscurrently working on the design of the next generation of long-baseline neutrino experiments, designed specifically to observe the CP violation in the neutrino sector, should it exist.Roman Walczak studied physics at the University of Warsaw where he was employed after graduation in 1977. Whilst affiliated with Warsaw, he spent large fraction of his time being involved in projects abroad, mostly at DESY and CERN. In 1981 he obtained Dr. rer. nat. degree from the Heidelberg University. His main expertise in particle physics is in design of wire chambers and calorimeters and on physics beyond SM as well as on some aspects of the QCD. He worked on projects at the followingaccelerators: PS, ISR, SPS at CERN, and PETRA and HERA at DESY. He is one of the founders of the ZEUS experiment. He was one the ZEUS coordinators responsible for designing, building and commissioning of the ZEUS detector. He also served as a coordinator of Exotic (i.e. Beyond SM) Physics Group. In 1993he moved to Oxford as University Lecturer at the University of Oxford and Tutorial Fellow at Somerville College. He was promoted to Reader in 2008 and to Associate Professor in 2014.