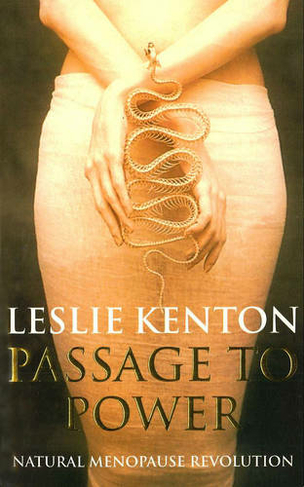 Now in a new B format edition, PASSAGE TO POWER continues to help thou sands of woemn who fear the menopause or who are suffering from menopausal troubles. A veritable bible, it tackles the science of menopause and scrutinses the practices commonly associated with it. Leslie Kenton questions the benefits of HRT, examines the politics behind such treatment and sets out the principles of natural HRT. The book describes the extraordinary healing powers of natural progesterone and reveals the devastating effects of xenoestrogens -environmental chemicals to which western women (and men) are increasingly exposed. Finally, she shows women how to reconnect with their deepest levels of intuition and instinct on their journey towards individual freedom. Taken as a whole, PASSAGE TO POWER enables all women to face the menopause in possession of all the knowledge they need to live their lives to the full.

Award-winning writer, television broadcaster and author of numerous bestsellers, Leslie Kenton is described by the press as 'the guru of health'. A shining example of energy and commitment, she is highly respected for her through reporting. Leslie was born in California, and is the daughter of jazz musician Stan Kenton. After leaving Stanford University she journeyed to Europe in her early twenties, settling first in Paris then in Britain where she has since remained. She has raised four children on her own by working as a television broadcaster, novelist, writer and teacher on health and for fourteen years she was editor at Harpers & Queens. Leslie's writing on mainstream health is internationally known and has appeared in Vogue, the Sunday Times, Cosmopolitan and the Daily Mail. She is the author of many other health books including; The New Raw Energy and Raw Energy Recipes - co-authored with her daughter Susannah - The New Ultrahealth, The New Joy of Beauty, The New Ageless Ageing, Cellulite Revolution, 10 Day Clean-Uo Plan, Endless Energy, Nature's Child, Lean Revolution and 10 Day De-Stress Plan. She turned to fiction with Ludwig - her first novel. Former consultant to a medical corporation in the USA and to the Open University's Centre of Continuing Education, Leslie's writing has won several awards including the PPA 'Technical Writer of the Year'. Her work was honoured by her being asked to deliver the McCarrison Lecture at the Royal Society of Medicine. In recent years she has become increasingly concerned not only with the process of enhancing individual health but also with re-establishing binds with the earth as a part of helping to heal the planet.