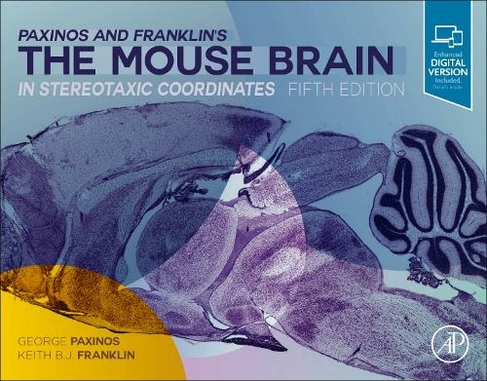 Also available on eBook for £97.91. Click here to purchase from Rakuten Kobo

Paxinos and Franklin's The Mouse Brain in Stereotaxic Coordinates, Compact Fifth Edition, is the compact version of the most widely used and cited atlas of the mouse brain in print. It emulates in design and accuracy Paxinos and Watson's The Rat Brain in Stereotaxic Coordinates, the most cited publication in neuroscience. The compact edition provides the coronal plates and diagrams of the full mouse atlas in a smaller, more convenient spiral format and at a student friendly price. High resolution digital photographs of the coronal plane of section from the full 5th edition complement the coronal drawings. Unique to the compact, it includes an introduction to the use of the atlas in stereotaxic surgery.

Dr. Franklin is Professor Emeritus at McGill University in the Department of Psychology. He is interested in neural mechanisms of motivation, particularly the role of specific neurotransmitter systems. His research uses pharmacological and molecular biological methods to study the role of monoamines, opiate peptides and neurosteroids in pain, memory and drug dependence. Professor George Paxinos, AO (BA, MA, PhD, DSc) completed his BA at The University of California at Berkeley, his PhD at McGill University, and spent a postdoctoral year at Yale University. He is the author of almost 50 books on the structure of the brain of humans and experimental animals, including The Rat Brain in Stereotaxic Coordinates, now in its 7th Edition, which is ranked by Thomson ISI as one of the 50 most cited items in the Web of Science. Dr. Paxinos paved the way for future neuroscience research by being the first to produce a three-dimensional (stereotaxic) framework for placement of electrodes and injections in the brain of experimental animals, which is now used as an international standard. He was a member of the first International Consortium for Brain Mapping, a UCLA based consortium that received the top ranking and was funded by the NIMH led Human Brain Project. Dr. Paxinos has been honored with more than nine distinguished awards throughout his years of research, including: The Warner Brown Memorial Prize (University of California at Berkeley, 1968), The Walter Burfitt Prize (1992), The Award for Excellence in Publishing in Medical Science (Assoc Amer Publishers, 1999), The Ramaciotti Medal for Excellence in Biomedical Research (2001), The Alexander von Humbolt Foundation Prize (Germany 2004), and more.