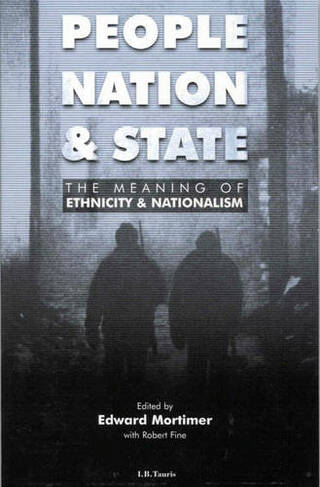 People, Nation and State The Meaning of Ethnicity and Nationalism

While conflicts of class, ideology and political systems have receded in the post-Cold War world, divisions based on group identity - cultural, ethnic, religious, and national - have assumed new importance. From Bosnia to Belfast and Burundi, from California to Kosovo, the difficulty of defining and reconciling group identities, and of relating them to state structures, has become one of the central problems of our time. Nations in the developed world are no less immune from these complex issues whether they involve Scottish nationalism, the rival national identities in Northern Ireland, the uneasy integration of former GDR citizens into a united Germany, the perennial problems of Afro-Americans and Hispanics in the United States, not to mention the myriad factors raised by the disappearance of the Soviet Union. Leading scholars and writers such as the late Ernest Gellner, Bhikhu Parekh, Olivier Roy, Michael Ignatieff and Professor Adam Roberts of Oxford University have collaborated with Edward Mortimer to illuminate the issues of ethnic and national identity which have emerged as central to the politics of today's world. They examine definitions of ethnicity; the relationship between nationhood and nationalism; sexual politics relating to nationalism and ethnicity; the problem of national identity in a multicultural society as well as surveying the problems and opportunities thrown up by different kinds of nationalism. By exploring various perspectives on a highly topical subject this book makes an important contribution to a better understanding of the workings of politics in today's world. index

Edward Mortimer is Honorary Professor at Warwick University and Foreign Affairs Editor at the Financial Times and has also acted as a Principal Advisor to UN Secretary-General Kofi Annan. Robert Fine is Senior Lecturer in Sociology at the University of Warwick.