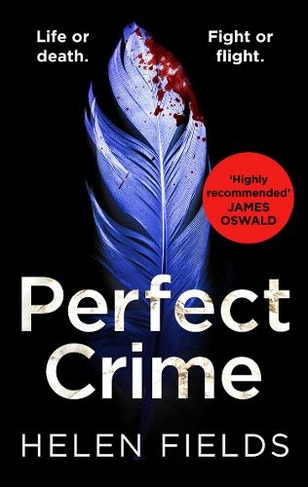 By Helen Fields (Author)
Paperback
https://www.whsmith.co.uk/products/perfect-crime-5/helen-fields/paperback/9780008275204-12-000.html £6.55 rrp £7.99 Save £1.44 (18%)
GBP
Availability
In Stock
Free Delivery Available When You Spend £25 Or More
Details
Spend £25 On Products To Receive Free Standard Delivery To Your Home Or Free Next Working Day Click And Collect To Store

Your darkest moment is your most vulnerable... Stephen Berry is about to jump off a bridge until a suicide prevention counsellor stops him. A week later, Stephen is dead. Found at the bottom of a cliff, DI Luc Callanach and DCI Ava Turner are drafted in to investigate whether he jumped or whether he was pushed... As they dig deeper, more would-be suicides roll in: a woman found dead in a bath; a man violently electrocuted. But these are carefully curated deaths - nothing like the impulsive suicide attempts they've been made out to be. Little do Callanach and Turner know how close their perpetrator is as, across Edinburgh, a violent and psychopathic killer gains more confidence with every life he takes... An unstoppable crime thriller from the #1 bestseller. The perfect read for fans of Karin Slaughter and M. J. Arlidge. What others are saying about Perfect Crime: 'This is one of the best crime fiction series out there... Helen Fields always delivers gripping, compelling, thrilling and tense stories full of intriguing characters.' Reader review 'Addictive, absorbing and absolutely page turning, the fifth book in the DI Callanach crime thriller series lives up to its name... I haven't read any of the previous books in this series, but that didn't matter, it reads perfectly as a standalone.' Reader review 'Perfect Crime is exciting and shocking in equal measures. Old foes return, new psychopaths are introduced, and there's a bit of personal stuff going on too. This is easily one of the best police procedural/crime series around.' Reader review 'This series of books are just fantastic. They are dark, creepy, addictive and I can't recommend them highly enough.' Reader review 'Highly recommended' James Oswald, author of the Inspector McLean series 'Deliciously dark and gritty' Caroline Mitchell, author of the DI Amy Winter Thriller series

Helen Fields studied law at the University of East Anglia, then went on to the Inns of Court School of Law in London. After completing her pupillage, she joined chambers in Middle Temple where she practised criminal and family law for thirteen years. After her second child was born, Helen left the Bar. Together with her husband David, she runs a film production company, acting as script writer and producer. Perfect Remains is set in Scotland, where Helen feels most at one with the world. Helen and her husband now live in Los Angeles with their three children and two dogs.