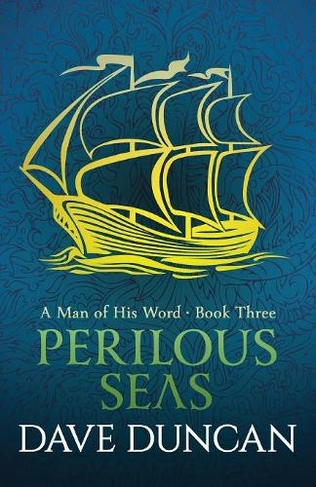 The epic fantasy adventure of Queen Inos continues as she is pursued by powerful warlocks, all the while convinced her beloved servant, Rap, is dead. Still stuck in the desert land of Zark-and mourning Rap-Queen Inos has conflicted feelings about Sultan Azak's proposal. Her heart lies with her beloved kingdom of Krasnegar and her duty to its people. But when she and Azak make a desperate escape, Inos is shocked by an image of Rap and knows that he must be alive-somewhere . . . On the island of Durthing, Rap's gift of farsight has made him too valuable to be truly free-until the evil Nordland raider Kalkor captures him after a bloody slaughter. Testing his magical wits against Kalkor, Rap searches for a chance to escape and restore Inos to her rightful throne. "If it's traditional fantasy adventure with a bit of nudge-nudge wink-wink you're after, Dave Duncan is your go-to guy. " -SFReviews.net "Duncan takes all the trusted fantasy ingredients, meticulously prepares them and brings them together with skill and relish. . . . The series bears resemblance to Robin Hobb's Farseer Trilogy." -Fantasy Book Review "Duncan's unique concept of goblins, fauns, and imps adds a new twist to this imaginative fantasy adventure. Recommended." -Library Journal

Dave Duncan (1933-2018) was born in Scotland, and received his diploma from Dundee High School and got his college education at the University of Saint Andrews. He moved to Canada in 1955, where he lived with his wife. Duncan spent thirty years as a petroleum geologist. He has had dozens of fantasy and science fiction novels published, among them A Rose-Red City, Magic Casement, and The Reaver Road, as well as a highly praised historical novel, Daughter of Troy, published, for commercial reasons, under the pseudonym Sarah B. Franklin. He also published the Longdirk series of novels, Demon Sword, Demon Knight, and Demon Rider, under the name Ken Hood. In the fall of 2007, Duncan's 2006 novel, Children of Chaos, published by Tor Books, was nominated for both the Prix Aurora Award and the Endeavour Award. In May 2013, Duncan, a 1989 founding member of SFCanada, was honored by election as a lifetime member by his fellow writers, editors, and academics. He passed away in 2018. Visit https://www.daveduncanauthor.com/ for more information on the author.