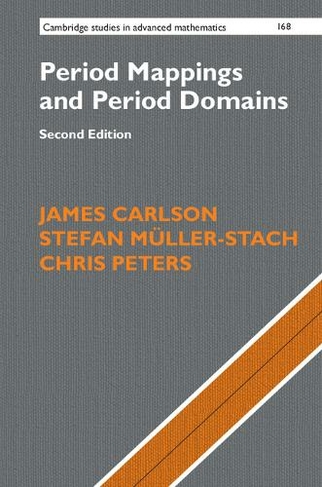 This up-to-date introduction to Griffiths' theory of period maps and period domains focusses on algebraic, group-theoretic and differential geometric aspects. Starting with an explanation of Griffiths' basic theory, the authors go on to introduce spectral sequences and Koszul complexes that are used to derive results about cycles on higher-dimensional algebraic varieties such as the Noether-Lefschetz theorem and Nori's theorem. They explain differential geometric methods, leading up to proofs of Arakelov-type theorems, the theorem of the fixed part and the rigidity theorem. They also use Higgs bundles and harmonic maps to prove the striking result that not all compact quotients of period domains are Kahler. This thoroughly revised second edition includes a new third part covering important recent developments, in which the group-theoretic approach to Hodge structures is explained, leading to Mumford-Tate groups and their associated domains, the Mumford-Tate varieties and generalizations of Shimura varieties. Worked examples or Exercises; 3 Tables, black and white; 35 Line drawings, black and white

James Carlson is Professor Emeritus at the University of Utah. From 2003 to 2012, he was president of the Clay Mathematics Institute, New Hampshire. Most of Carlson's research is in the area of Hodge theory. Stefan Muller-Stach is Professor of number theory at Johannes Gutenberg Universitat Mainz, Germany. He works in arithmetic and algebraic geometry, focussing on algebraic cycles and Hodge theory, and his recent research interests include period integrals and the history and foundations of mathematics. Recently, he has published monographs on number theory (with J. Piontkowski) and period numbers (with A. Huber), as well as an edition of some works of Richard Dedekind. Chris Peters is a retired professor from the Universite Grenoble Alpes, France and has a research position at the Eindhoven University of Technology, The Netherlands. He is widely known for the monographs Compact Complex Surfaces (with W. Barth, K. Hulek and A. van de Ven, 1984), as well as Mixed Hodge Structures, (with J. Steenbrink, 2008). He has also written shorter treatises on the motivic aspects of Hodge theory, on motives (with J. P. Murre and J. Nagel) and on applications of Hodge theory in mirror symmetry (with Bertin).