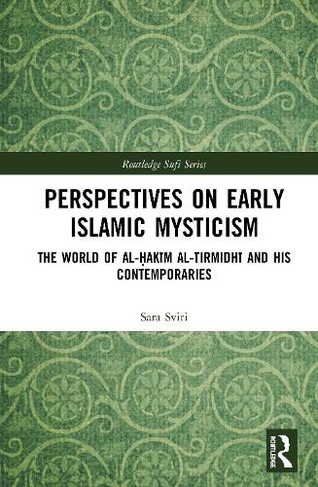 Perspectives on Early Islamic Mysticism: The World of al-Hakim al-Tirmidhi and his Contemporaries (Routledge Sufi Series)

This monograph explores the original literary produce of Muslim mystics during the eighth-tenth centuries, with special attention to ninth-century mystics, such as al-Tustari, al-Muhasibi, al-Kharraz, al-Junayd and, in particular, al-Hakim al-Tirmidhi. Unlike other studies dealing with the so-called 'Formative Period', this book focuses on the extant writings of early mystics rather than on the later Sufi compilations. These early mystics articulated what would become a hallmark of Islamic mysticism: a system built around the psychological tension between the self (nafs) and the heart (qalb) and how to overcome it. Through their writings, already at this early phase, the versatility, fluidity and maturity of Islamic mysticism become apparent. This exploration thus reveals that mysticism in Islam emerged earlier than customarily acknowledged, long before Islamic mysticism became generically known as Sufism. The central figure of this book is al-Hakim al-Tirmidhi, whose teaching and inner world focus on themes such as polarity, the training of the self, the opening of the heart, the Friends of God (al-awliya'), dreams and visions, divine language, mystical exegesis and more. This book thus offers a fuller picture than hitherto presented of the versatility of themes, processes, images, practices, terminology and thought models during this early period. The volume will be a key resource for scholars and students interested in the study of religion, Sufi studies, Late Antiquity and Medieval Islam. 3 Line drawings, black and white; 5 Illustrations, black and white

Sara Sviri is Professor Emerita at the Department of Arabic and the Department of Comparative Religions of The Hebrew University of Jerusalem. She had also taught at the Department of Hebrew and Jewish Studies, University College London and at The Institute of Jewish Studies, University of Oxford. Her fields of study include Islamic mysticism, mystical philosophy, comparative aspects of Early Islam, the formative period of Islamic mysticism, Medieval Jewish mysticism and the mystical wisdom of Ibn al-'Arabi. Her book The Taste of Hidden Things: Images on the Sufi Path was published in 1997. Her comprehensive Sufi Anthology was published in Hebrew in 2008. The Arabic version of the Anthology came out in Beirut by Manshurat al-jamal (2016).