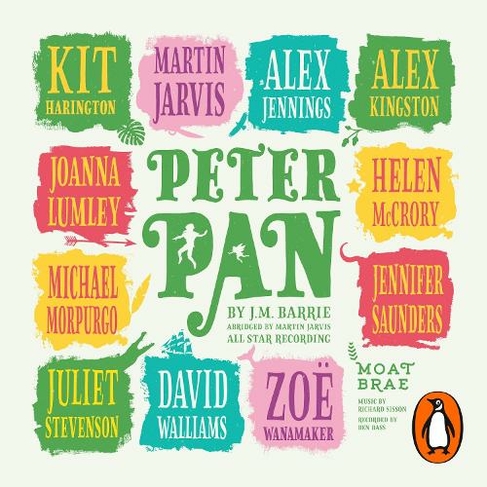 By J M Barrie (Author), Kit Harrington(Read by), David Walliams(Read by), Joanna Lumley(Read by), Jennifer Saunders(Read by), Michael Morpurgo(Read by), Juliet Stevenson(Read by), Martin Jarvis(Read by), Alex Jennings(Read by), Alex Kingston(Read by)
Audio Book
https://www.whsmith.co.uk/products/peter-pan-brought-to-life-by-magical-storytellers-unabridged-edition/j-m-barrie/michael-morpurgo/audio-book/9780241424629-12-000.html £7.37 rrp £8.99 Save £1.62 (18%)
GBP
Availability
PRE-ORDER released 05 November 2020
With Free Standard Delivery To Your Home Or Store
Details
Free Standard Delivery To Your Home Or Free Next Working Day Click And Collect To Store
Share

When Peter Pan flies through the Darling Children's nursery window one night, he is nearly captured and makes a hasty escape, leaving behind his shadow. Returning with the fairy Tinker Bell to reclaim it, he wakes up Wendy, John and Michael, and whisks them away to the magical shores of Neverland. There they meet the Lost Boys, befriend Tiger Lily and her Braves, swim with the mermaids in the lagoon and have a host of wonderful adventures. But danger awaits too, for the terrible Captain Hook and his pirate gang are determined to make them walk the plank... Abridged by Marin Jarvis, JM Barrie's timeless masterpiece is introduced by Michael Morpurgo and read by ten star actors: Kit Harrington, Martin Jarvis, Alex Jennings, Alex Kingston, Joanna Lumley, Helen McCrory, Jennifer Saunders, Juliet Stevenson, David Walliams and Zoe Wanamaker. All publisher's profits from the sale of this recording will be shared equally between The Peter Pan Moat Brae Trust (Registered Scottish Charity Number SC041382 and Company Number SC363695) and Great Ormond Street Hospital Children's Charity (Registered Charity Number 1160024 and Company number 09338724).

J M Barrie (Author) James Matthew Barrie (1860-1937) was born in Scotland. He moved to London in 1885. He had a high reputation as a playwright, with productions including Quality Street (1901) and The Admirable Crichton (1902). Peter Pan was first produced on stage in 1904 and in 1911 he turned the story into a book.Michael Morpurgo (Reader) Michael Morpurgo is one of Britain's best-loved storymakers. He has written over 150 books loved by readers around the world. His best-known work, War Horse, was adapted into a multi-Oscar-nominated film by Steven Spielberg and into a widely acclaimed play by the National Theatre. In 2003 Michael became the third Children's Laureate, a position he helped to create with the poet Ted Hughes. With his wife, Clare, he set up the charity Farms for City Children, and for their pioneering work they were both awarded the MBE in 1999. In 2017 he was awarded a knighthood for services to literature and charity.David Walliams (Reader) David Walliams is a comedian, actor and writer, best known for his partnership with Matt Lucas on the hugely successfully BBC sketch comedy Little Britain. He is an active fundraiser, memorably swimming both the English Channel and the Thames, as well as broadcasting continuously for 24 hours. His love life has been the focus of much media attention, and in 2011 he tied the knot with Dutch model Lara Stone.Jennifer Saunders (Reader) Jennifer Saunders is a comedian, writer and actress. She has won three BAFTAs (including the Bafta Fellowship), an International Emmy, a British Comedy Award, a Rose d'Or, two Writers' Guild Awards and a People's Choice Award. She also has a certificate for coming third in the discus at the Northwich Area Sports championships, and numerous rosettes for clear round jumping and gymkhana on her pony. She lives in Devon and London with her husband Adrian Edmondson. She has three daughters who are all grown up and have left home. They have been replaced with a whippet called Olive. She has recently been forced to become a grandmother despite only being 55. Bonkers is her first book.@ferrifrump