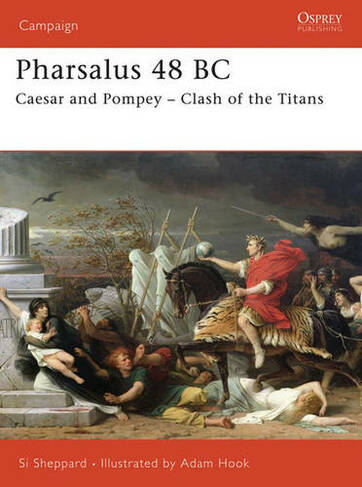 In 48 BC, the stage was set for the final clash of the two titans of the Roman world and the odds were heavily in Pompey's favour, with 45,000 men against Caesar's 22,000. Having the dice loaded against him, however, seems to have stimulated Caesar's guile and genius for battle: guessing that Pompey would attempt to overwhelm his right wing with his cavalry, he concealed elite cohorts of legionnaires behind his own cavalry with orders to use their stabbing spears against the faces of the enemy. Pompey's army retreated, with Caesar's army in parallel pursuit, until, their general having escaped, Pompey's men finally surrendered. Simon Sheppard expertly charts the events surrounding the Pharsalus campaign, and the seismic implications of the decisive clash between the two greatest generals of their age. Illustrations (some col.)

Simon Sheppard is a graduate student of Political Science at John Hopkins University. He graduated with an MA Distinction from the University of Wellington and was winner of the Sir Desmond Todd Award for best thesis in a political subject. Simon Sheppard is a published author and has contributed a number of articles to leading journals, magazines and newspapers. The author lives in Baltimore, USA.