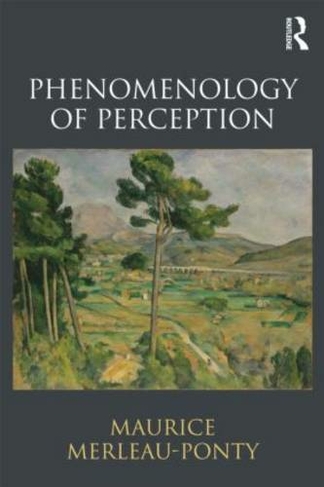 By Maurice Merleau-Ponty (Author)
Paperback
https://www.whsmith.co.uk/products/phenomenology-of-perception/maurice-merleauponty/paperback/9780415834339-12-000.html £22.79 rrp £23.99 Save £1.20 (5%)
GBP
Availability
In Stock
Free Delivery Available When You Spend £25 Or More
Details
Spend £25 on eligible products to receive free standard delivery to home or free next working day click and collect to store
Share

First published in 1945, Maurice Merleau-Ponty's monumental Phenomenologie de la perception signalled the arrival of a major new philosophical and intellectual voice in post-war Europe. Breaking with the prevailing picture of existentialism and phenomenology at the time, it has become one of the landmark works of twentieth-century thought. This new translation, the first for over fifty years, makes this classic work of philosophy available to a new generation of readers. Phenomenology of Perception stands in the great phenomenological tradition of Husserl, Heidegger, and Sartre. Yet Merleau-Ponty's contribution is decisive, as he brings this tradition and other philosophical predecessors, particularly Descartes and Kant, to confront a neglected dimension of our experience: the lived body and the phenomenal world. Charting a bold course between the reductionism of science on the one hand and "intellectualism" on the other, Merleau-Ponty argues that we should regard the body not as a mere biological or physical unit, but as the body which structures one's situation and experience within the world. Merleau-Ponty enriches his classic work with engaging studies of famous cases in the history of psychology and neurology as well as phenomena that continue to draw our attention, such as phantom limb syndrome, synaesthesia, and hallucination. This new translation includes many helpful features such as the reintroduction of Merleau-Ponty's discursive Table of Contents as subtitles into the body of the text, a comprehensive Translator's Introduction to its main themes, essential notes explaining key terms of translation, an extensive Index, and an important updating of Merleau-Ponty's references to now available English translations. Also included is a new foreword by Taylor Carman and an introduction to Merleau-Ponty by Claude Lefort. Translated by Donald A. Landes.

Maurice Merleau-Ponty was born in 1908 in Rochefort-sur-Mer, France. Drawn to philosophy from a young age, Merleau-Ponty would go on to study alongside Jean-Paul Sartre, Simone de Beauvoir, and Simone Weil at the famous Ecole Normale Superieure. He completed a Docteur es lettres based on two dissertations, La structure du comportement (1942) and Phenomenologie de la perception (1945). After a brief post at the University of Lyon, Merleau-Ponty returned to Paris in 1949 when he was awarded the Chair of Psychology and Pedagogy at the Sorbonne. In 1952 he became the youngest philosopher ever appointed to the prestigious Chair of Philosophy at the College de France. He died suddenly of a stroke in 1961 aged fifty-three, at the height of his career. He is buried in Pere Lachaise Cemetery in Paris.