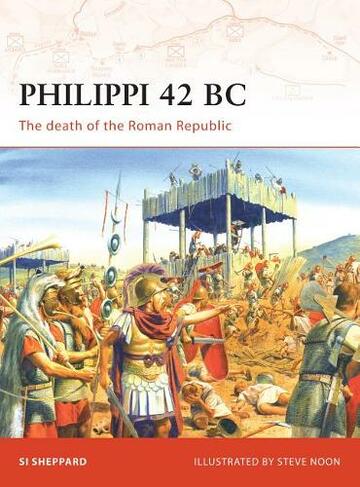 Forever immortalised by Shakespeare's play "Julius Caesar", the battle of Philippi was the final battle between the forces of Mark Antony and Octavian against the armies of Caesar's assassins Brutus and Longinus.

Si Sheppard is a graduate student of Political Science at John Hopkins University. He graduated with an MA Distinction from the University of Wellington and was winner of the Sir Desmond Todd Award for best thesis in a political subject. Simon Sheppard is a published author and has contributed a number of articles to leading journals, magazines and newspapers. For the Osprey Campaign series, he has previously written Pharsalus 48 BC. The author lives in Jersey City, New Jersey.Steve Noon was born in Kent, UK, and attended art college in Cornwall. He has had a life-long passion for illustration, and since 1985 has worked as a professional artist. Steve has provided award-winning illustrations for renowned publishers Dorling Kindersley, where his interest in historical illustration began.The illustrator lives in Cardiff, UK.