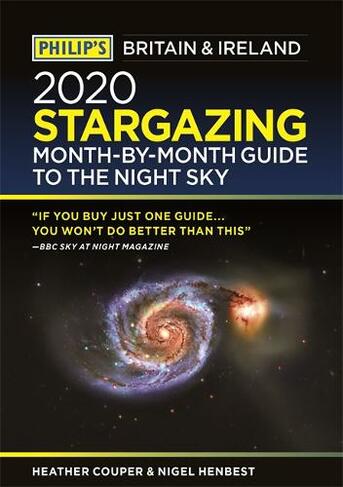 "I WILL CONTINUE TO ENJOY STARGAZING AS THE MONTHS GO BY" Helen Sharman, astronaut "VERY USEFUL INDEED" Chris Lintott, Sky at Night presenter "IF YOU BUY JUST ONE GUIDE... YOU WON'T DO BETTER THAN THIS" BBC Sky at Night Magazine Philip's Month-by-Month Stargazing 2020 is the new, bestselling and most-up-to-date guide for Stargazers in Britain and Ireland. The new 2020 edition has been completely revised to make it even more essential for exploring the night skies - making the night sky accessible to beginners and experts alike. * 12 month-by-month Night Sky Maps for year-round stargazing * Monthly Calendar of moon phases and special events in 2020 * Planet Watch: the best viewing days for planets in 2020 * Dark Sky Map of the UK - find the darkest skies * How to photograph the night skies - with cameras and smartphones * The major astronomical events of 2020 * Month-by-month Top 20 Sky Sights 2020 * Plus new, illustrated Jargon Buster Plus: * Expert advice on what to see each month from Heather Couper and Nigel Henbest, Philip's internationally renowned authors. * The Solar System 2020 explains the movement of the planets, with particular attention paid to their positions in 2020. Solar and lunar eclipses, meteor showers and comets are also described. * Expert Robin Scagell's Equipment Review looks at the pros and cons of Stargazing with reflector or refractor telescopes. * And all superbly illustrated with photographs taken by the best amateur photographers illustrating the night skies. About the Authors Philip's Stargazing Month by Month 2020 is written by two of the UK's best-known and respected astronomers. Prof. Heather Couper and Prof. Nigel Henbest are qualified astrophysicists, dedicated to sharing their love of the cosmos to everyone. They work in TV and radio broadcasting, international presentations, and have written over fifty popular books between them.

Professor Heather Couper, a former President of the British Astronomical Association, was made a Commander of the British Empire (CBE) in 2007 for Services to Science. After researching at Cambridge, Professor Nigel Henbest was appointed consultant to both New Scientist magazine and the Royal Greenwich Observatory. He is a future astronaut with Virgin Galactic.The authors have written over fifty books on astronomy and space, as well as presenting/producing dozens of radio and TV programmes for the international market.