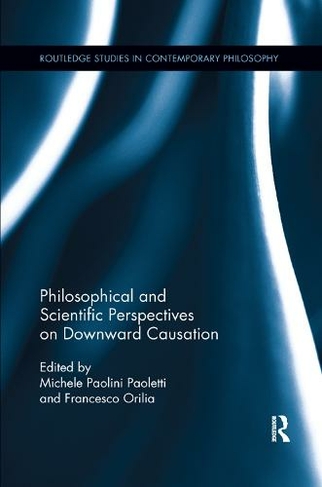 Downward causation plays a fundamental role in many theories of metaphysics and philosophy of mind. It is strictly connected with many topics in philosophy, including but not limited to: emergence, mental causation, the nature of causation, the nature of causal powers and dispositions, laws of nature, and the possibility of ontological and epistemic reductions. Philosophical and Scientific Perspectives on Downward Causation brings together experts from different fields-including William Bechtel, Stewart Clark and Tom Lancaster, Carl Gillett, John Heil, Robin F. Hendry, Max Kistler, Stephen Mumford and Rani Lill Anjum -who delve into classic and unexplored lines of philosophical inquiry related to downward causation. It critically assesses the possibility of downward causation given different ontological assumptions and explores the connection between downward causation and the metaphysics of causation and dispositions. Finally, it presents different cases of downward causation in empirical fields such as physics, chemistry, biology and the neurosciences. This volume is both a useful introduction and a collection of original contributions on this fascinating and hotly debated philosophical topic. 14 Line drawings, black and white

Michele Paolini Paoletti is a postdoctoral researcher at the University of Macerata (Italy). He has published articles and books on several ontological issues (including the theory of fictional objects, negative facts, relations), on physicalism and emergentism (for example, his recent "How Powers Emerge from Relations" on Axiomathes).Francesco Orilia is a Professor of Logic and Philosophy of Language at the University of Macerata (Italy). His research focuses on ontology, logic, philosophy of language and mind. His recent publications include: Singular Reference. A Descriptivist Perspective (2010), "Positions, Ordering Relations, O-Roles" (2014), "Moderate Presentism" (2016).