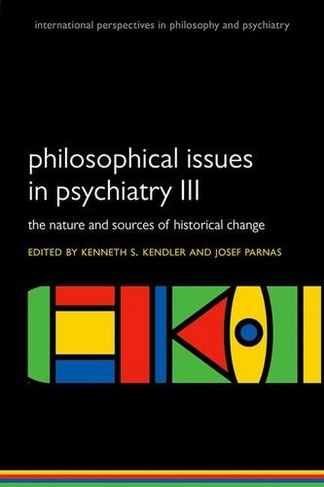 Psychiatry has long struggled with the nature of its diagnoses. The problems raised by questions about the nature of psychiatric illness are particularly fascinating because they sit at the intersection of philosophy, empirical psychiatric/psychological research, measurement theory, historical tradition and policy. In being the only medical specialty that diagnoses and treats mental illness, psychiatry has been subject to major changes in the last 150 years. This book explores the forces that have shaped these changes and especially how substantial "internal" advances in our knowledge of the nature and causes of psychiatric illness have interacted with a plethora of external forces that have impacted on the psychiatric profession. It includes contributions from philosophers of science with an interest in psychiatry, psychiatrists and psychologists with expertise in the history of their field and historians of psychiatry. Each chapter is accompanied by an introduction and a commentary. The result is a dynamic discussion about the nature of psychiatric disorders, and a book that is compelling reading for those in the field of mental health, history of science and medicine, and philosophy.

The major focus of Professor Kendler's research is in the genetics of psychiatric and substance abuse disorders. Two major methodologies are used in this research. The first involves large population based twin samples. In these twins, we address the aggregate role of genetic and environmental factors. We seek to understand how these factors interact and correlate, and how, through development, the vulnerability to psychiatric illness and drug abuse is expressed. Ihave focused my work with twin samples from Virginia - in particular the Virginia Adult Twin Study of Psychiatric and Substance Use Disorders - but also worked with twin samples from Norway, Sweden and Holland. My work has focused on a wide range of disorders including major depression, anxietydisorders, eating disorders, externalizing behaviors, alcoholism, and drug abuse. I have worked a lot toward understanding the genetic and environmental sources of comorbidity of psychiatric and substance use disorders.Josef Parnas is Professor of Psychiatry at the University of Copenhagen, psychiatric consultant at Psychiatric Center Hvidovre (Copenhagen) and co-founder and senior researcher at the Center of Subjectivity Research, an interdisciplinary research center, integrating philsophy of mind, phenomenology and psychopathology Universirt of Copenhagen, Faculty of the Humanities). Parnas has a long track recored in epidemiological, genetic and psychopathological research in schizophrenia. His researchin recent years has mainly dealt with the abnormalities of the structure of experience, especially disorders of self-hood, in the schizophrenia spectrum disorders. Another focus is on the nature of the psychiatric object and psychodiagnostic assessment. He has for many years published on theoretical,phenomenological, and epistemological problems in psychopathology.