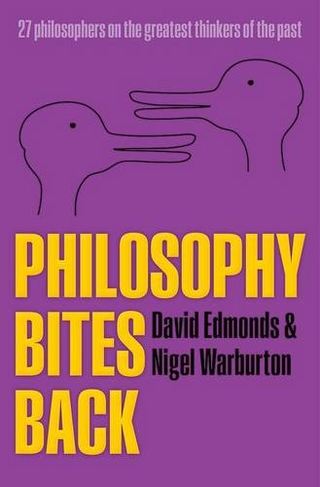 Philosophy Bites Back is the second book to come out of the hugely successful podcast Philosophy Bites. It presents a selection of lively interviews with leading philosophers of our time, who discuss the ideas and works of some of the most important thinkers in history. From the ancient classics of Socrates, Plato, and Aristotle, to the groundbreaking modern thought of Wittgenstein, Rawls, and Derrida, this volume spans over two and a half millennia of western philosophy and illuminates its most fascinating ideas. Philosophy Bites was set up in 2007 by David Edmonds and Nigel Warburton. It has had over 12 million downloads, and is listened to all over the world.

David Edmonds is an award-winning documentary maker for the BBC World Service. He is the author or co-author (with John Eidinow) of several books, including Wittgenstein's Poker (short-listed for the Guardian First Book Award), Bobby Fischer Goes To War (long-listed for the Samuel Johnson prize), and Rousseau's Dog (about the relationship between Jean-Jacques Rousseau and David Hume). He is currently a Research Associate at the UehiroCentre for Practical Ethics at Oxford University and a Contributing Editor for Prospect Magazine. Nigel Warburton is a freelance philosopher, podcaster, and writer. His books include A Little History of Philosophy, Philosophy: the Basics, Thinking from A to Z, Philosophy: the Classics, The Art Question, and Free Speech: A Very Short Introduction. He runs several weblogs including virtualphilosopher.com and artandallusion.com.