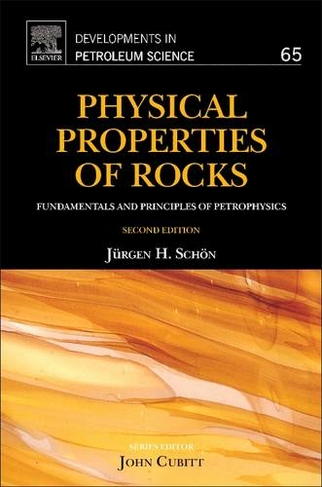 Also available on eBook for £107.15. Click here to purchase from Rakuten Kobo

The interpretation of geophysical data in exploration geophysics, well logging, engineering, mining and environmental geophysics requires knowledge of the physical properties of rocks and their correlations. Physical properties are a "key" for combined interpretation techniques. The study of rock physics provides an interdisciplinary treatment of physical properties, whether related to geophysical, geotechnical, hydrological or geological methodology. Physical Properties of Rocks, 2nd Edition, describes the physical fundamentals of rock properties, based on typical experimental results and relevant theories and models. It provides readers with all relevant rock properties and their interrelationships in one concise volume. Furthermore, it guides the reader through experimental and theoretical knowledge in order to handle models and theories in practice. Throughout the book the author focuses on the problems of applied geophysics with respect to exploration and the expanding field of applications in engineering and mining geophysics, geotechnics, hydrology and environmental problems, and the properties under the conditions of the upper Earth crust.

Jurgen H. Schoen is a consulting petrophysicist and Honorary Professor at Montanuniversitat Leoben. Schoen was educated at Bergakademie Freiberg (Mining Institute of Freiberg), Germany, where in 1962 he graduated with a Diploma in geophysics; in 1967 he received his Doctor of Natural Science. In his career, Schoen has held a variety of academic positions: at the Bergakademie Freiberg he was Professor and Head of the Geophysics Department (1987-1991). In 1991, he moved to the Institute of Applied Geophysics, Joanneum Research, in Leoben, Austria; where, from 2000 to 2004, he was the science manager of the geophysical institute. In 1993, he was a visiting Professor at the Colorado School of Mines. In 1999 he became Honorary Professor at the Montanuniversitat Leoben. In his academic positions he was also a thesis supervisor for students studying formation evaluation. Since 1999 he has expanded his teaching beyond university and has taught training courses (Petrophysics, Formation Evaluation) for industry.