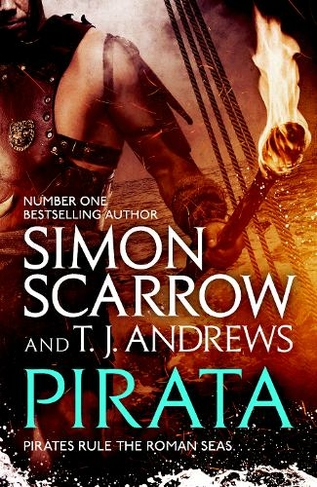 Pirata: The dramatic novel of the pirates who hunt the seas of the Roman Empire

By Simon Scarrow (Author), T. J. Andrews (Author)
Hardback
£16.00 rrp £20.00 Save £4.00 (20%)
GBP
Availability
In Stock
Free Delivery Available When You Spend £25 Or More
Details
Spend £25 On Products To Receive Free Standard Delivery To Your Home Or Free Next Day Click and Collect To Stores

The dramatic and action-packed novel of Roman pirates from the bestselling author of the Eagles of the Empire series It is AD 25. Pirate ships strike terror in the hearts of those who brave the seas of the Roman Empire. When Telemachus joins the crew of the merchant ship Selene, he's glad to escape the rough streets of Piraeus. He knows little of the dangers of life at sea. Even past hardship has not prepared him for the terror on board when a pirate ship appears. The fight is bloody, but the result is never in doubt. Then the victorious pirate chief, Bulla, offers the beaten men a cruel choice: join us, or die. After surviving a brutal initiation rite, Telemachus impresses his new captain with his resourcefulness and strength, and swiftly rises through the pirate ranks. But dangerous rivals talk of mutiny and murder. While Prefect Canis, notorious commander of the imperial fleet, is relentless in his pursuit of the pirate brotherhood. Could Telemachus be the man to lead the pirates and challenge Rome? PIRATA is also available in five ebook novella parts. What readers are saying about PIRATA 'Highly recommended' Amazon reviewer, 5 stars 'Very good suspense' Amazon reviewer, 5 stars 'Couldn't put it down from start to finish, more like this please' Amazon reviewer, 5 stars 'Very atmospheric... gripping story lines' Amazon reviewer, 5 stars

Simon Scarrow is a Sunday Times No. 1 bestselling author. His bestsellers include: ARENA and INVADER, also co-written with T. J. Andrews; his novels featuring Roman soldiers Macro and Cato, including THE BLOOD OF ROME and DAY OF THE CAESARS; SWORD AND SCIMITAR, about the 1565 Siege of Malta; HEARTS OF STONE, set in Greece during the Second World War; four novels about the lives of the Duke of Wellington and Napoleon Bonaparte; and PLAYING WITH DEATH, a contemporary thriller written with Lee Francis. T. J. Andrews was born near Barking Abbey and grew up in Essex, not far from the Ancient Roman garrison at Colchester. After several years in publishing he became a full-time writer. He lives in St Albans.