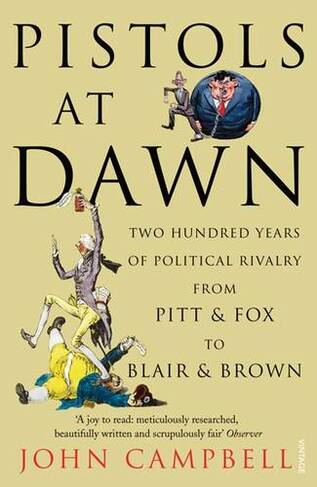 Pistols at Dawn: Two Hundred Years of Political Rivalry from Pitt and Fox to Blair and Brown

By John Campbell (Author)
Paperback
https://www.whsmith.co.uk/products/pistols-at-dawn-two-hundred-years-of-political-rivalry-from-pitt-and-fox-to-blair-and-brown/john-campbell/paperback/9781845950910-01-000.html £13.79 rrp £14.99 Save £1.20 (8%)
GBP
Availability
Currently unavailable. We don't know when or if this item will be back in stock
Free Saver Delivery on orders over £20
Details
FREE SHIPPING over £20 for Saver Delivery
Share

Benjamin Disraeli and William Gladstone. Edward Heath and Margaret Thatcher. Gordon Brown and Tony Blair. Personal rivalry is the very stuff of politics. The causes and controversies, the parties and technology may have changed over time but political conflict is still dramatised by the competition of ambitious individuals for the highest offices. Over the past two hundred years the size of the electorate has grown enormously and the means of reaching it transformed out of all recognition but human nature itself hasn't changed. In his thought-provoking book John Campbell considers eight pairs of rivals and shows how their antagonism, which often evolved into outright loathing, has determined the course of political conflict. In each of his cases studies - Fox and Pitt, Castlereagh and Canning, Gladstone and Disraeli, Asquith and Lloyd George, Bevan and Gaitskell, Macmillan and Butler, Heath and Thatcher, Brown and Blair - he combines a vivid narrative with an authoritative assessment of the historical legacy that reveals how ideology is inextricably entwined with personality.

John Campbell is recognised as one of Britain's leading political biographers. In addition to Edward Heath, which won the NCR Award in 1994, and his highly praised two-volume biography of Margaret Thatcher (2000 and 2003), his subjects have included Lloyd George (1977), F.E. Smith, Lord Birkenhead (1983), Roy Jenkins (1983) and Aneurin Bevan (1986). His most recent book, If Love Were All: The Story of Frances Stevenson and David Lloyd George, was published in 2006. He is currently writing the authorised biography of Roy Jenkins.