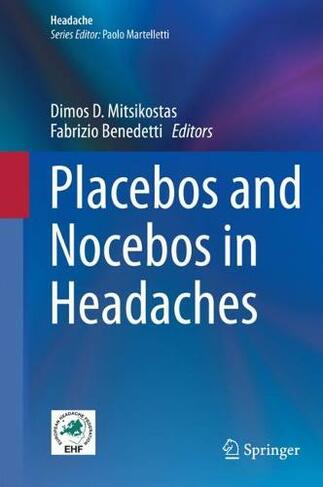 This book discusses the role of placebos and nocebos in the treatment of headache disorders. These disorders are usually treatable, but safety and tolerability issues mean that available preventive treatments have often limited success, even in the right hands - one in five patients treated with a migraine preventive pharmaceutical agent discontinues treatment for those reasons. The nocebo effect plays a role here, with patients' negative expectation and previous unpleasant treatment experiences creating negative belief in the treatment's benefits and safety, which in turn limits treatment outcomes and adherence significantly. In RCTs on migraine prevention, one in 20 patients treated with a placebo discontinued treatment because of adverse events, indicating a considerable nocebo effect; the fewer potential adverse events described in the consent form, the smaller the nocebo effect. As such, physicians treating headache sufferers should acknowledge nocebo as a significant cofactor for treatment adherence and failure, and plan techniques to limit the effects, such as patient education and close follow-up. This highly informative and painstakingly presented book provides scientific insights for professionals and scholars with an interest in internal medicine, neurology and pain medicine. 3 Illustrations, color; 2 Illustrations, black and white; IX, 142 p. 5 illus., 3 illus. in color.

Prof Mitsikostas graduated from the Aristotele University Medical School, Thessaloniki, Greece, in 1985; he obtained his PhD degree in experimental neuropharmacology from the National & Kapodistrian University, Athens, Greece; and he certified in neurology, in 1993 (Aeginition Hospital, National & Kapodistrian University of Athens). He has pursued postdoc studies in experimental molecular pharmacology of pain at Harvard Medical School, Boston, Massachusetts, USA (1996-1998, Professor M.A. Moskowitz's laboratory) and at the Institute of Neurology, University College London, UK (2000-2001, Professor P.J. Goadsby's laboratory and Headache Clinic). He served at and directed the Neurology Department of the Athens Naval Hospital from 2001 until May 2016. He is an associate professor of neurology at Aeginition Hospital, heading the Unit A and the Headache Out Patient Clinic of the 1st Neurology Department. He also teaches medical students, neurology residents and fellows. His clinical work is focused on headache, multiple sclerosis, pain and nocebo and he has lectured nationally and internationally on these topics.He continues to work on animal models for cephalic pain and multiple sclerosis, and participates in several multi-center clinical trials. He is author of more than 100 peer-reviewed papers with more than 7,000 citations (h-index 31), editor/co-editor of eight textbooks and reviewer and/or member of the advisory board of numerous peer-reviewed international medical journals. He is member of several national and international societies and Fellow in the European Academy of Neurology. Prof Mitsikostas is currently president of the Hellenic Headache Society (2015-2018 and 2018-2021) and past president of the executive board of the European Headache Federation (2014-2016). Fabrizio Benedetti received his M.D. degree from the University of Turin Medical School (Italy) and was awarded the Silbert Scholarship for Psychiatry and Biobehavioral Sciences at the University of California, Los Angeles. Currently he is professor of physiology and neuroscience at the University of Turin Medical School, and director of Medicine & Physiology of Hypoxia at the Plateau Rosa Laboratories (Italy/Switzerland). He began studying placebos in the 1990s while researching pain and movement disorders. He has been invited to participate in numerous international conferences and to give lectures and is now a member of the Academy of Europe (Medicine & Physiology section) and the European Dana Alliance for the Brain. He is author of the book "Placebo Effects" (Oxford, 2nd Ed 2014) which was awarded the medical books award in 2009 by the British Medical Association.