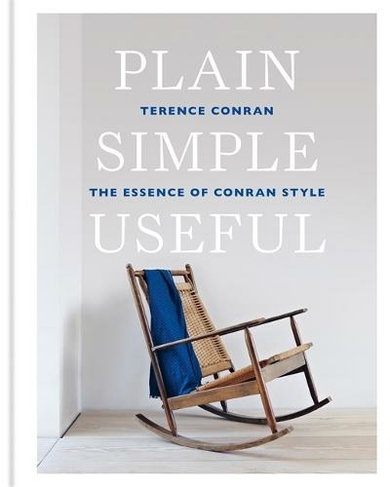 By Sir Terence Conran (Author)
Hardback
https://www.whsmith.co.uk/products/plain-simple-useful-the-essence-of-conran-style/terence-conran/hardback/9781840918120-12-000.html £21.60 rrp £27.00 Save £5.40 (20%)
GBP
Availability
In Stock
With Free Standard Delivery To Your Home Or Store
Details
Spend £15 On Eligible Products To Recieve Free Standard Delivery To You Home Or Free Next Working Day Click And Collect To Store
Share

'A handsome yet joyful manual for easy, stylish living.' - Architectural Digest Terence Conran always believed that objects - and surroundings - that are plain, simple and useful are the key to easy living. By being practical and performing well over time, they are as much the antidote to superficial styling as they are to the shoddy and second-rate. Applied to the home as a whole, this discerning approach results in interiors that are effortlessly stylish, confident and timeless, with plenty of room for the expression of personal taste. Plain Simple Useful is organized according to the main activities that take place at home. Inspirational interiors, many of which were Conran's own, provide all the guidance you need to tailor-make your own storage. The book also features iconic examples of classic designs that will enhance any home, as well as a peek behind the closed doors of those well-ordered cupboards, larders and other stowing spaces that contribute so much to easy living. This updated edition of the book features a new chapter on plain, simple, useful style outdoors with elegant contemporary ideas for eating and relaxing spaces outside.

Sir Terence Conran was one of the world's best-known designers, retailers and restaurateurs. Born in 1931 he founded the Conran Design Studio in 1956, and in 1964 opened the first of the Habitat chain of home furnishing stores that revolutionized design on the British high street in the '60s and '70s and continued to expand its influence around the globe. Later Terence established The Conran Shop and opened stores in London, Paris, Germany, New York, across Japan as well as his largest store ever in Seoul, South Korea. In the 1990s Terence founded Conran Restaurants, opening iconic restaurants, hotels and bars around the world including Quaglino's, Bluebird, Mezzo, Guastavino's and Le Pont de la Tour. His other restaurant ventures included the iconic Bibendum in Chelsea and The Boundary in Shoreditch. In 1989 he founded the Design Museum in London, the world's first museum dedicated to design, which moved to larger premises in the former Commonwealth Building in Kensington, in 2016. Terence wrote more than 50 informative books that reflect his philosophy - that good design improves the quality of people's lives. Terence was knighted for his services to design in 1983, and in 2018 he was made a Companion of Honour by Her Majesty The Queen, one of the highest distinctions available in the United Kingdom.