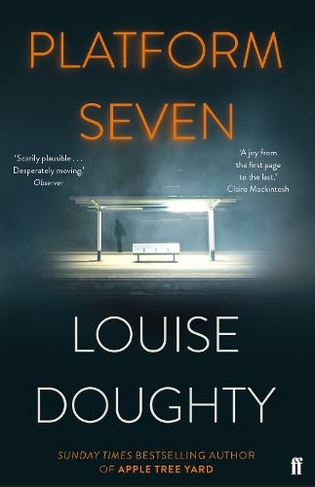 By Louise Doughty (Author)
Paperback
https://www.whsmith.co.uk/products/platform-seven-main/louise-doughty/louise-doughty/paperback/9780571321964-03-000.html £4.49 rrp £8.99 Save £4.50 (50%)
GBP
Availability
In Stock
Free Delivery Available When You Spend £25 Or More
Details
Spend £25 on eligible products to receive free standard delivery to home or free next working day click and collect to store
Share

'Utterly mesmerising.' Deborah Moggach 'Beautifully constructed.' Clare Mackintosh 'A scarily plausible story . . .' Guardian The new novel from Sunday Times bestselling author of Apple Tree Yard Platform Seven at 4am: Peterborough Railway Station is deserted. The man crossing the covered walkway on this freezing November morning is confident he's alone. As he sits on the metal bench at the far end of the platform it is clear his choice is strategic - he's as far away from the night staff as he can get. What the man doesn't realise is that he has company. Lisa Evans knows what he has decided. She knows what he is about to do as she tries and fails to stop him walking to the platform edge. Two deaths on Platform Seven. Two fatalities in eighteen months - surely they're connected? No one is more desperate to understand what connects them than Lisa Evans herself. After all, she was the first of the two to die.

Louise Doughty is the author of eight novels, most recently Black Water, which was published in 2016 to critical acclaim in the UK and US, where it was nominated as one of the New York Times Notable Books of the Year. Her previous book was the Top Ten bestseller Apple Tree Yard, adapted for BBC One as a four-part series starring Emily Watson. She is a critic and cultural commentator for UK and international newspapers and broadcasts regularly for the BBC. She lives in London.