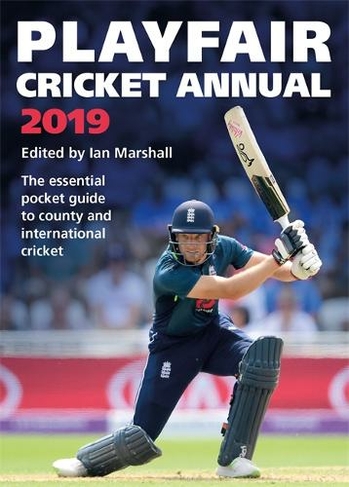 By Ian Marshall (Author)
Paperback
https://www.whsmith.co.uk/products/playfair-cricket-annual-2019/ian-marshall/paperback/9781472249814-12-000.html £8.19 rrp £9.99 Save £1.80 (18%)
GBP
Availability
In Stock
Free Delivery Available When You Spend £25 Or More
Details
Spend £25 on eligible products to receive free standard delivery to home or free next working day click and collect to store
Share

The 72nd edition of the Playfair Cricket Annual is packed with all the information you need to follow the cricket season in 2019. As fans look forward to a bumper summer, with the Cricket World Cup and an eagerly anticipated Ashes series, cricket will rarely have had so much exposure. There are comprehensive Test match and limited-overs records and career records to help you follow the action, as well as series records against Australia. For the first time, England will also play Ireland in Test match cricket. County cricket is covered in unrivalled depth, with biographies of all players registered to the counties at the start of the season, full coverage of last summer's events and a fixture list for all major domestic matches in 2019. There are also sections on Ireland's cricketers, women's cricket, the major domestic T20 competitions from around the world, while the Editorial assesses the looming arrival of The Hundred in 2020. For any cricket fan, the season is never complete without a copy of Playfair to guide you through it all.

Ian Marshall took over as Editor of the Playfair Cricket Annual in 2009, having previously worked on 15 editions of the annual in his role as a book publisher. During his 30-year publishing career, he has worked with some of cricket's greatest players, including Mike Atherton, Sir Ian Botham, Geoffrey Boycott, Stuart Broad, David Gower, Justin Langer, Dennis Lillee and Sir Garry Sobers. He still occasionally plays cricket, and has toured Africa, India and Sri Lanka.