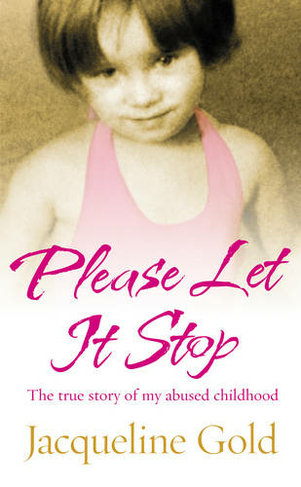 Please Let It Stop The true story of my abused childhood

'In retrospect, I can see I was the perfect candidate for child abuse. My parents had divorced and my mother didn't show me much love. Her self-imposed isolation kept me away from other children. My abuser had nobody in his way.' Please Let It Stop is a gripping and ultimately inspiring memoir of suffering and determination, of obstacles and inner battles. Jacqueline Gold was abused by her stepfather for many years, but one day she summoned the courage to ask him to stop. Jacqueline went on to become Chief Executive of Ann Summers, but the journey was far from easy. In this, her no-holds-barred autobiography, Jacqueline describes her abused childhood, her tumultuous struggles to find love and conquer depression, and the heartbreak of undergoing IVF. Told with remarkable honesty, her story is a testament to one woman's ability to overcome the darkest of times. 8 pages plates

Jacqueline Gold, Chief Executive of Ann Summers and Knickerbox, is one of Britain's most successful businesswomen. She has been voted the second Most Powerful Woman in Retail Week, the Most Inspirational Businesswoman in the UK in a survey by Barclays Bank and handbag.com, one of Britain's 10 Most Powerful Women by both Cosmopolitan and Woman magazines, and Business Communicator of the Year 2004.Jacqueline has been the subject of several documentaries including Back To The Floor (BBC2, 2001), Ann Summers Uncovered (ITV1, 2003) and So What Do You Do All Day (BBC2, 2004); co-presented the daytime business series Mind Your Own Business (BBC1, 2005) and appeared on Fortune: Million Pound Giveaway (ITV1, 2007) and The Verdict (BBC1, 2007). She is a columnist for Retail Week, New Business and Kent Business.