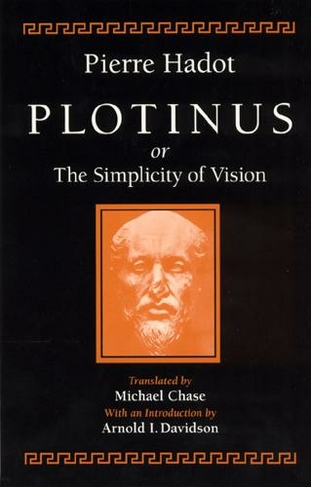 Plotinus or the Simplicity of Vision New edition

Since its original publication in France in 1963, Pierre Hadot's lively philosophical portrait of Plotinus remains the preeminent introduction to the man and his thought. Michael Chase's lucid translation--complete with a useful chronology and analytical bibliography--at last makes this book available to the English-speaking world. Hadot carefully examines Plotinus's views on the self, existence, love, virtue, gentleness, and solitude. He shows that Plotinus, like other philosophers of his day, believed that Plato and Aristotle had already articulated the essential truths; for him, the purpose of practicing philosophy was not to profess new truths but to engage in spiritual exercises so as to live philosophically. Seen in this light, Plotinus's counsel against fixation on the body and all earthly matters stemmed not from disgust or fear, but rather from his awareness of the negative effect that bodily preoccupation and material concern could have on spiritual exercises. 1 halftone, chronology, bibliography