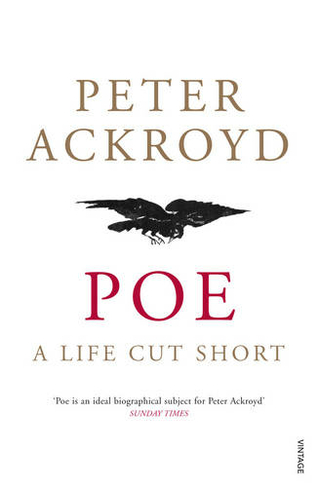 Heralded as a genius, the forerunner of modern fantasy and credited with the invention of the psychological drama, science fiction and the detective story , Edgar Allan Poe had a life as dramatic and tragic as his art. Poe's life was dominated by dying women; his mother died of consumption when he was only two, his stepmother when he was twenty, and his wife, Virginia, died of the same disease and at the same age as his mother. As Ackroyd brilliantly shows, it was these deaths, together with his miserable childhood, that led to such dark and dazzling tales as 'The Fall of the House of Usher' and 'Berenice', although it was wiht the publication of 'The Raven' that the writer finally ahcieved the recognition of which he dreamed. Success couldn't save him from himself, however, and he was dead by the age of forty, his final days as mysterious as much of his writing. Poe was an extraordinary writer and in Peter Ackroyd, he has found his perfect biographer.

Peter Ackroyd is an award-winning historian, biographer, novelist, poet and broadcaster. He is the author of the acclaimed non-fiction bestsellers London: The Biography, Thames: Sacred River and London Under; biographies of figures including Charles Dickens, William Blake, Charlie Chaplin and Alfred Hitchcock; and a multi-volume history of England. He has won the Whitbread Biography Award, the Royal Society of Literature's William Heinemann Award, the James Tait Black Memorial Prize, the Guardian Fiction Prize, the Somerset Maugham Award and the South Bank Prize for Literature. He holds a CBE for services to literature.