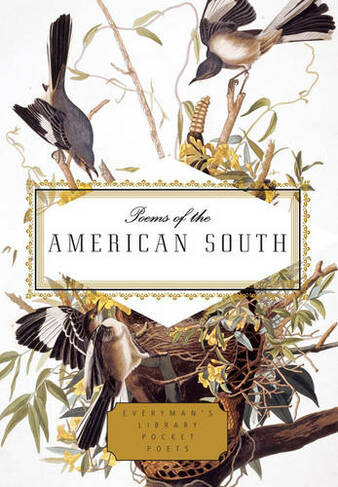 The arc of poetry of the South, from slave songs to Confederate hymns to Civil War ballads, from Reconstruction turmoil to the Agrarian movement to the dazzling poetry of the New South, is richly varied and historically vibrant. No other region of the United States has been as mythologized as the South, nor contained as many fascinating, beguiling, and sometimes infuriating contradictions. Poems of the American South includes poems both by Southerners and by famous observers of the South who hailed from elsewhere. These range from Herman Melville, Walt Whitman, Edgar Allan Poe, and Francis Scott Key through Langston Hughes, Robert Penn Warren, Wallace Stevens, Elizabeth Bishop, James Dickey, and Donald Justice, and include a host of living poets as well: Wendell Berry, Rita Dove, Sandra Cisneros, Yusef Komunyakaa, Naomi Shihab Nye, C. D. Wright, Natasha Trethewey, and many more. Organized thematically, the anthology places poems from past centuries in fruitful dialogue with a diverse array of modern voices who are redefining the South with a verve that is reinvigorating American poetry as a whole.

DAVID BIESPIEL is a poet who was born in Tulsa, Oklahoma, raised in Houston, Texas, and educated at Boston University, University of Maryland, and Stanford University. He is the founder of the Attic Institute in Portland, Oregon, an independent literary studio, and he teaches creative writing at Oregon State University. He is the author of five volumes of poetry, and the recipient of a National Endowment for the Arts fellowship and a Stegner fellowship, and serves as a judge for the National Book Critics Circle Awards.