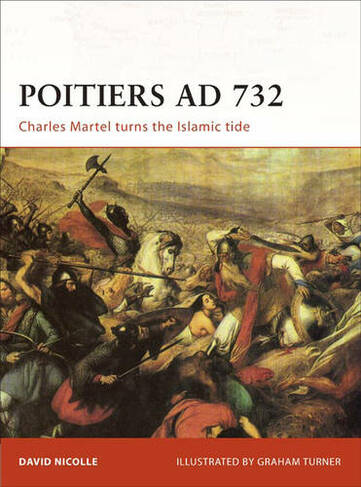 In the early decades of the 8th century AD, Islamic forces were flooding into Europe through the Iberian peninsula, threatening Frankish and Burgundian territory and raiding it with ever-increasing ferocity. At the battle of Poitiers, also known as Tours, Christian forces under the Frankish leader Charles Martel "The Hammer" (grandfather of Charlemagne) confronted a massive invading Islamic army. The Franks were victorious, effectively halting the northward advance of Islam and preserving Christianity as the dominant faith in Europe. Expert medievalist David Nicolle draws on contemporary sources to reconstruct this turning-point battle, places it in its historical context and reviews its background and immediate and longer-term historical consequences. Illustrations (some col.)

Born in 1944, David Nicolle worked in the BBC's Arabic service for a number of years before gaining an MA from the School of Oriental and African Studies, London, and a doctorate from Edinburgh University. He has written numerous books and articles on medieval and Islamic warfare, and has been a prolific author of Osprey titles for many years. The author lives in Leceistershire, UK.