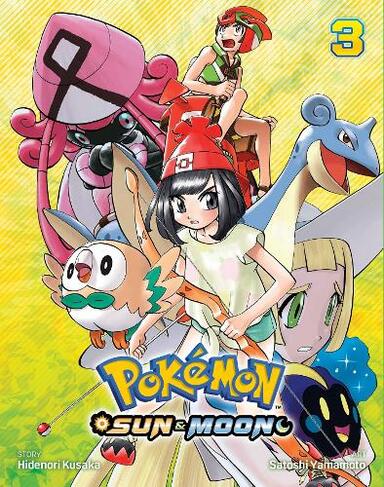 Awesome adventures inspired by the best-selling new Pokemon Sun & Moon video games set in the tropical Alola Region! Sun dreams of money. Moon dreams of scientific discoveries. When their paths cross with Team Skull, both their plans go awry... In hopes of earning the right to compete to win the prestigious island challenge amulet, Sun and Moon set off for Akala Island to have their Trainer skills tested by Trial Captains Kiawe, Lana and Mallow. Sun must battle a powerful Totem Pokemon-but first he has to find it! Meanwhile, Moon searches for an elusive, mysterious Berry... What important lesson does Sun need to learn...? 0

Hidenori Kusaka is the writer for VIZ Media's Pokemon Adventures. Running continuously for over 20 years, Pokemon Adventures is the only manga series to completely cover all the Pokemon games and has become one of the most popular series of all time. Kusaka is currently working on the 14th story arc, Pokemon: Sun & Moon. In addition to writing manga, he also edits children's books and plans mixed-media projects for Shogakukan's children's magazines. He uses the Pokemon Electrode as his author portrait.Satoshi Yamamoto is the artist for VIZ Media's Pokemon Adventures, which he began working on in 2001, starting with volume 10. Yamamoto launched his manga career in 1993 with the horror-action title Kimen Senshi, which ran in Shogakukan's Weekly Shonen Sunday magazine, followed by the series Kaze no Denshosha. He is currently working on the 14th story arc in the Pokemon series, Pokemon: Sun & Moon. Yamamoto's favorite manga creators/artists include Fujiko Fujio (Doraemon), Yukinobu Hoshino (2001 Nights) and Katsuhiro Otomo (Akira). He loves films, monsters, mysteries, punk rock music and livin' the good life. He uses the Pokemon Swalot as his artist portrait.