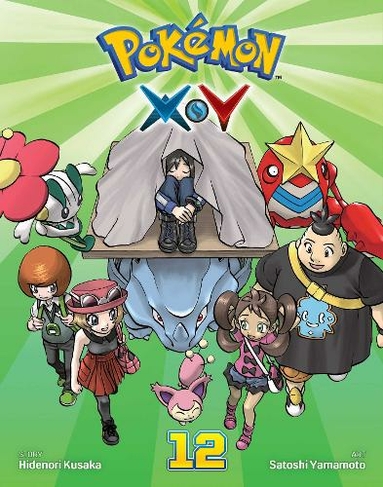 Awesome Pokemon adventures inspired by the best-selling Pokemon X and Y video games! X was a Pokemon Trainer child prodigy. But now he's depressed and hides in his room avoiding everyone-including his best friend Y. An attack on their hometown by Legendary Pokemon Xerneas and Yveltal, led by Team Flare, forces X outside... Now what? Team Flare makes a second attempt to activate the Ultimate Weapon and destroy the Kalos region! And this time, X, Y and friends will need some truly expert help to put a stop to the evil organization's nefarious plan and heartless methods. Yet as this heart-pounding battle comes to an end, it's our friends who are faced with a moral dilemma... Also, will Yveltal and Xerneas fight on for eternity...? * Releases 3 times a year for 12 volumes. FINAL VOLUME. * Pokemon is one of the most successful franchises of all time with over 279 million video games sold worldwide. * 21.5 billion Pokemon trading cards have been sold in over 74 countries. * Pokemon Go, a mobile collaboration between Pokemon, Nintendo, and Niantic Inc., launched in July 2016 and has been downloaded more than 500 million times worldwide. * An all-new Pokemon animated series of shorts launched in September 2016 on the official Pokemon YouTube channel. * The Pokemon Black and White volumes have sold over 176,600 units over 20 volumes, and the compilation series Pokemon Adventures: Black and White has sold over 30,000 units over 8 volumes in the US (Bookscan 2/17); The Pokemon Adventures manga series has sold over 529,000 units over 29 volumes in the US (Bookscan 2/17).