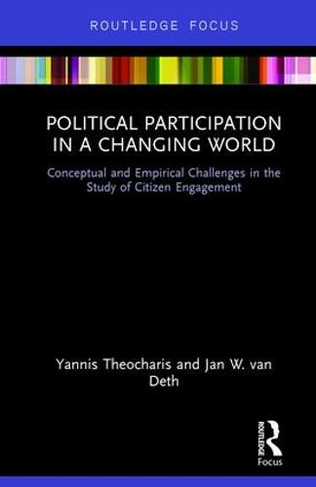 Political Participation in a Changing World: Conceptual and Empirical Challenges in the Study of Citizen Engagement

Also available on eBook for £14.51. Click here to purchase from Rakuten Kobo

Yannis Theocharis is Research Fellow at the Mannheim Centre for European Social Research (MZES), University of Mannheim, Germany. His research focuses on political behavior, political communication, new media, and social networks. He was Alexander von Humboldt Fellow and has co-directed several projects investigating the impact of social media on politics. His work has appeared in political science and communication journals such as Journal of Communication, European Political Science Review, New Media & Society, and Electoral Studies.Jan W. van Deth is Professor Emeritus of Political Science and International Comparative Social Research at the University of Mannheim, Germany. His research areas are political culture (especially social capital, political engagement, and citizenship), social change, and comparative research methods. He is a Corresponding Member of the Royal Netherlands Academy of Arts and Sciences (KNAW) and Project Director at the MZES. His publications appeared in leading international journals and with high-ranked publishers.