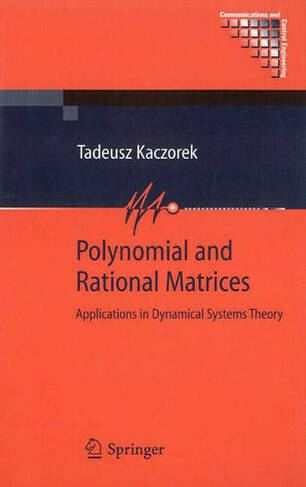 By Tadeusz Kaczorek (Author)
Hardback
https://www.whsmith.co.uk/products/polynomial-and-rational-matrices-applications-in-dynamical-systems-theory-2007-ed/tadeusz-kaczorek/hardback/9781846286049-01-000.html N/A
GBP
Availability
Currently unavailable. We don't know when or if this item will be back in stock
Free Saver Delivery on orders over £20
Details
FREE SHIPPING over £20 for Saver Delivery
Share

This book reviews new results in the application of polynomial and rational matrices to continuous- and discrete-time systems. It provides the reader with rigorous and in-depth mathematical analysis of the uses of polynomial and rational matrices in the study of dynamical systems. It also throws new light on the problems of positive realization, minimum-energy control, reachability, and asymptotic and robust stability. 10 Illustrations, black and white; XVI, 503 p. 10 illus.

Tadeusz Kaczorek, received the MSc., PhD and DSc degrees from Electrical Engineering of Warsaw University of Technology in 1956, 1962 and 1964, respectively. Between 1968 and 1969 he was the dean of Electrical Engineering Faculty and from 1970until 1973 he was the prorector of Warsaw University of Technology. He has been a full Professor since 1974. In 1996 he was elected as a full member of Polish Academy of Sciences. From 1988 to 1991 he was the director of the Research Centre of Polish Academy of Sciences in Rome. In June 1999 he was elected as a full member of the Academy of Engineering in Poland. In May 2004 he was elected the honorary member of the Hungarian Academy of Sciences. He holds honorary doctorates from the University of Zielona Gora (2002), the Technical University of Lublin (2004), the Technical University of Szczecin (2004) and Warsaw University of Technology (2004).His research interests cover the theory of systems and the automatic control systems, particularly singular multidimensional systems, positive multidimensional systems and singular positive 1- and 2-dimensional systems. He has researched the field of singular and positive 2-dimensional linear systems. He has published 18 books (5 in English) and over 700 scientific papers (in journals like IEEE Transactions on Automatic Control, IEEE Transactions on Neural Networks, Multidimensional Systems and Signal Processing, International Journal of Control, Bull. Pol. Acad. Sciences, etc.) and proceedings of conferences. He has presented more than 100 invited papers to international conferences and world congresses and has given invited lectures in more than 50 universities in the US, Canada, UK, Germany, Italy, France, Japan, Greece etc. He has been a member of many international committees and programme committees.Professor Kaczorek has supervised over 60 Ph.D. theses. More than 20 of this PhD students have become professors in the US, UK and Japan. He is Editor-in-Chief of Bulletin of the Polish Academy of Sciences, Techn. Sciences and editorial member of about ten international journals.