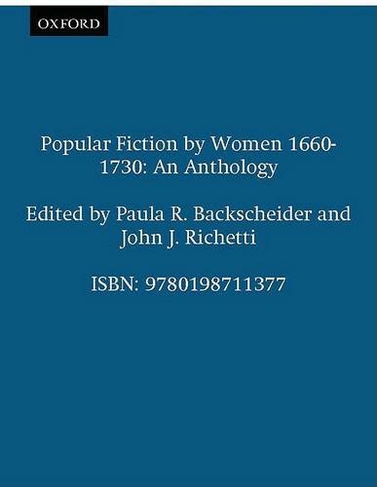 Popular Fiction by Women 1660-1730 gathers together for the first time a representative selection of shorter fiction by the most successful women writers of the period, from Aphra Behn, the first important English female professional writer, to Penelope Aubin and Eliza Haywood, who with Daniel Defoe dominated prose fiction in the 1720s. The texts included were amongst the best-selling titles of their time, and played a key role in the expanding market for narrative in the early eighteenth century. Crucial to the development of the longer novel of manners and morals that emerged in the mid-eighteenth century, these novellas have been neglected by literary historians, but now - with the impetus of feminist criticism - they have been re-established as an essential chapter in the history of the novel in English and are widely studied. Though strikingly varied in narrative format and purpose, ranging as they do from the errotic and sensational to the sentimental and pious, they offer a distinct fictional approach to the moral and social issues of the age from a female standpoint. Not only are these novels still a good read for those who enjoy fiction, but they are also essential to the understanding of the hostory of the English novel. The anthology raises a number of questions for readers and scholars alike: do these fictions constitute a counter-tradition or a rival and competing set of narrative choices to the male novel of the mid-eighteenth century? The diveristy of these stories, their affinities with the mainstream in some cases and their clear divergence from it in others, illuminates the very complexity of the issue. Yet, whatever the answer the reader settles on and whatever critical perspective one brings to reading this fiction, one thing is clear: fiction by women is an important part of the literary history of the eighteenth century. halftones