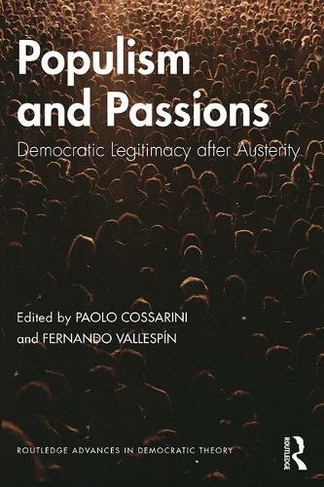 There is a consensus that right, and left-wing populism is on the rise on both sides of the Atlantic, from Donald Trump in the United States, to Spain's leftist Podemos. These may utilize different kinds of populist mobilizations but the fact remains that elite and mass opinion is fuelling a populist backlash. In Populism and Passions, twelve scholars engage with discourse analysis, democratic theory, and post structural political thought to study the political logic of passion for contemporary populism. Together these interdisciplinary essays demonstrate what emotional engagement implies for the spheres of politics and the social, and how it governs and mobilizes individuals. The volume presents: Theoretical and empirical implications for political analysis; Chapters on the current rise of populism, both right and left-wing trends, their different ideological features, and their relationship with the logic of passion; Theoretical implications for the future study of populism and democratic legitimacy. A timely analysis of this political phenomena in contemporary Western democracies, Populism and Passions is ideal for students and scholars in political theory, comparative politics, social theory, critical theory, cultural studies, and global studies. 5 Line drawings, black and white; 3 Halftones, black and white

Paolo Cossarini is Postdoctoral Fellow at the School of International Studies at the University of Trento, Italy. He previously taught Politics and International Relations at Loughborough University, UK. He has held visiting positions at the Paris Institute of Political Studies, Queen Mary University of London, and has been a member of the research project 'The political consequences of the economic crisis' funded by the Spanish Ministry of Education. His research focuses on democratic theory and populism, Spanish politics and nationalism, and the role of emotions in protest movements and political communication, as well as border and migration studies. He has published in Global Discourse, European Political Science, and Revista de Estudios Politicos, among other journalsFernando Vallespin is Professor of Political Science at the Universidad Autonoma de Madrid, Spain. He has directed the Department of Political Science and International Relations and the Centro de Teoria Politica at the same University. He has also been a postdoctoral Fulbright researcher at Harvard University, and has been visiting professor at the universities of Frankfurt, Heidelberg, Veracruz and Malaysia. He has published several books and over one hundred academic papers and chapters. Additionally, he was President of the Centro de Investigaciones Sociologicas (CIS) between May 2004 and May 2008, Academic Director of the Fundacion Ortega-Maranon (2012-2015), President of the Spanish Association of Political Studies (2013-2015) and member of IPSA's Executive Council (2014-2016).