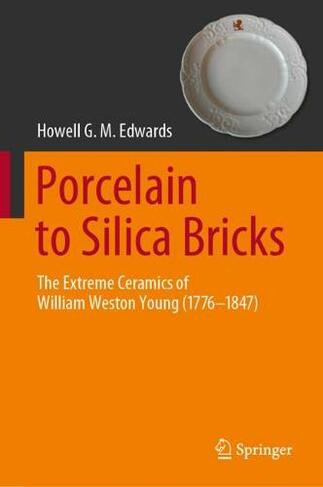 The title of this book describes the two extremes of ceramic invention from aesthetically beautiful and decorative works of art that graced the tables of the aristocracy to the functional silica brick that lined the smelting furnaces of industrialised nations in the 19th century designed to produce iron, copper and glass. Both of these ceramics are linked to one man, William Weston Young (1776-1847) and with his contemporaries both of these ceramic extremes became world leaders in their own right. The book traces the history of Young and his ambitions, his interactions with numerous associates and the influence these ceramics attained in 19th century society. The book provides a sequel to the two preceding texts on Nantgarw and Swansea porcelains (also published by Springer), which cover one extreme and extends the discourse onto the other extreme, which until now has been relatively ignored despite its scientific and engineering importance. The trilogy has now therefore been completed. This book examines the historical documentation along with scientific analytical data from the last 100 years up to the present in a novel holistic forensic approach. It will be of interest to porcelain collectors, ceramics analysts, museum ceramic curators, ceramic historians, analytical scientists, cultural heritage preservation, industrial archaeologists and industrial museums. 23 Illustrations, color; 8 Illustrations, black and white; XVIII, 200 p. 31 illus., 23 illus. in color.

Howell Edwards, M.A., B.Sc., D.Phil., C.Chem., FRSC, is Emeritus Professor of Molecular Spectroscopy at the University of Bradford. He studied Chemistry at Jesus College, Oxford, and completed his doctorate there followed by a Research Fellowship at Jesus College, Cambridge. He then joined the University of Bradford as Lecturer in Structural and Inorganic Chemistry. In 2003, he received the Sir Harold Thompson Award from Elsevier Science for his international contributions to vibrational spectroscopy. He is the recipient of the Emanuel Boricky Medal for 2008/2009 from Charles University, Prague, for distinguished international contributions to analytical geochemistry and mineralogical analysis. He was awarded the Charles Mann Award from the US Federation of Analytical Chemical Spectroscopic Societies in 2011 for distinguished international work on the analytical applications of Raman spectroscopy. In his research career he has published over 1260 papers on Raman spectroscopy and its applications and is the co-editor of six books on Raman spectroscopy and its applications to archaeology, art and forensic analysis. He has had a lifelong interest in the works of William Billingsley, especially porcelains from the Derby, Swansea and Nantgarw factories, and has published 2 books in sole authorship with Springer, the first on Swansea and Nantgarw Porcelains: A Scientific Reappraisal which appeared in 2017, the second on Nantgarw and Swansea Porcelains: An Analytical Perspective in 2018. In addition, he has published four monographs on William Billingsley and his porcelains, entitled: William Billingsley: The Enigmatic Porcelain Artist, Decorator and Manufacturer; Nantgarw Porcelain: The Pursuit of Perfection; Swansea Porcelain: The Translucent Vision of Lewis Dillwyn: and Derby Porcelain: The Golden Years, 1780-1830. He is Honorary Scientific Adviser to the de Brecy Trust for the scientific evaluation of artworks and paintings.