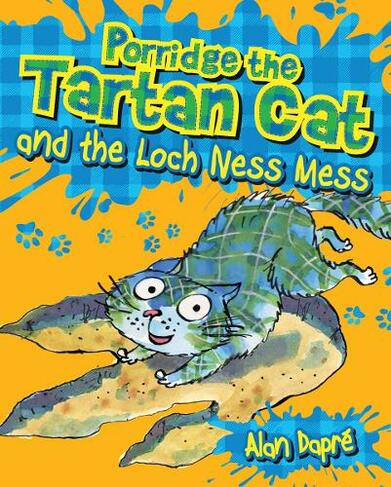 By Alan Dapre (Author), Yuliya Somina (Illustrator)
Paperback
https://www.whsmith.co.uk/products/porridge-the-tartan-cat-and-the-loch-ness-mess-4/alan-dapre/yuliya-somina/paperback/9781782503583-12-000.html £5.39 rrp £5.99 Save £0.60 (10%)
GBP
Availability
In Stock
Free Delivery Available When You Spend £25 Or More
Details
Spend £25 On Products To Receive Free Standard Delivery To Your Home Or Free Next Working Day Click And Collect To Store
Share

Also available on eBook for £2.63. Click here to purchase from Rakuten Kobo

When Porridge was a wee kitten he toppled into a tin of tartan paint -- which is easy to do and not so easy to say. Now he lives by Loch Loch with the quirky McFun family: Gadget Grandad, Groovy Gran, Dino Dad, Mini Mum and the twins, Roaring Ross and Invisible Isla. Everyone has a super secret -- or two-- and Porridge is always there to lend a helping paw when things go awry. If there's a fishy biscuit in it for him... And things do often go awry in the McFun family. It's a good job Porridge has nine lives! -------------- Porridge the Tartan cat (it's a long story involving a tin of tartan paint!) and the twins, Isla and Ross, have been dragged to Loch Ness where Dino Dad is hoping to dig up some pre-historic bones. But when a magic wishing bone transforms Dino Dad into a real-life dinosaur, he's mistaken for the Loch Ness Monster and captured by a Nessie-hunter! Can they prove Dino Dad isn't really Nessie and save him from the dastardly Fergus McFungus? Join Porridge and the twins on this dino-tastic, Nessie-riding romp around Scotland's most famous loch. What a Loch Ness mess! ----------------- In this zany new series for young readers, Porridge purrfectly CAT-a-logs the family's hilarious adventures from a cat's-eye perspective. With wacky twists, silly word play and meow-nificent illustrations in every chapter, readers won't even want to paws for breath. 40 b/w illustrations

Alan Dapre is the author of more than fifty books for children. He has also written over one hundred television scripts, transmitted in the UK and around the world. His plays have been on BBC Radio 4 and published for use in schools worldwide. Yuliya Somina is an award winning illustrator from Moscow. She graduated from the Moscow State Art College with a degree in fine arts and began her career in animation. Yuliya has illustrated many books including Michael Rosen's I Never Know How Poems Start and Bill Bryson's A Short History of Nearly Everything. She currently lives in Middlesex, England.