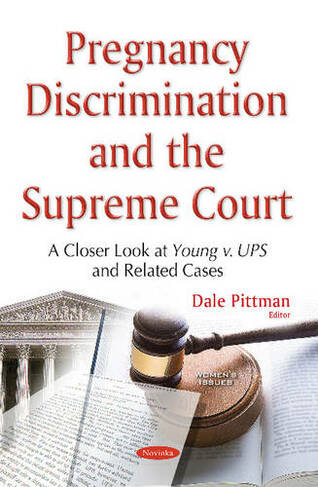 In 2015, the Supreme Court issued a decision in Young v. United Parcel Service. In the case, a United Parcel Service (UPS) worker named Peggy Young challenged her employers refusal to grant her a light-duty work assignment while she was pregnant, claiming that UPSs actions violated the Pregnancy Discrimination Act (PDA). In a highly anticipated ruling, the Justices fashioned a new test for determining when an employers refusal to provide accommodations for a pregnant worker constitutes a violation of the PDA, and the Court sent the case back to the lower court for reconsideration in light of these new standards. This book begins with a discussion of the facts in the Young case, followed by an overview of the PDA. The book then provides an analysis of the Young case, its implications, and a potential legislative response. Furthermore, the book focuses on sex discrimination challenges based on: the equal protection guarantees of the Fourteenth and Fifth Amendments; the prohibition against employment discrimination contained in Title VII of the Civil Rights Act of 1964; and the prohibition against sex discrimination in education contained in Title IX of the Education Amendments of 1972.