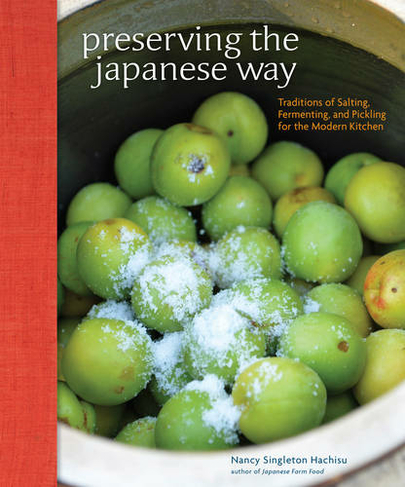 Preserving the Japanese Way: Traditions of Salting, Fermenting, and Pickling for the Modern Kitchen

By Nancy Singleton Hachisu (Author)
Hardback
https://www.whsmith.co.uk/products/preserving-the-japanese-way-traditions-of-salting-fermenting-and-pickling-for-the-modern-kitchen/nancy-singleton-hachisu/hardback/9781449450885-12-000.html £20.00 rrp £25.00 Save £5.00 (20%)
GBP
Availability
In Stock
Free Delivery Available When You Spend £25 Or More
Details
Spend £25 On Eligible Products To Receive Free Standard Delivery To You Home Or Free Next Working Day Click And Collect To Store
Share

Preserving the Japanese Wayoffers an easy to understand road map for preserving fruits, vegetables, and fish through a non-scientific, farm- or fisherman-centric approach. Backdrop to the 80 recipes outlined in this book, are the producers and the artisanal products used to make these salted and fermented foods. The arresting photos of the barrel maker, fish sauce producer, artisanal vinegar company, 200 hundred-year-old sake producer, and traditional morning pickle markets with wrinkled grandmas still selling their wares document an authentic view of the inner circle of Japanese life. Recipe methods range from the ultra-traditional: Umeboshi (Salt-Dried Sour Plums, Takuan (Rice Bran Fermented Dried Daikon), and Hakusai (Salt-Fermented Cabbage; to the modern: Shoyu Koji Zucchini Coins, Turnips Pickled in Plum Vinegar, and Melon in Sake Lees. Preserving with Salt & Koji also introduces and demystifies one of the most fascinating ingredients to hit the food scene in a decade: koji. Kojiis neither new, nor unusual in the landscape of Japan fermentation but it has quickly become a cult favourite for quick pickling or marinades. Preserving the Japanese Wayis a book about community, seasonality as the root of preserved food, and ultimately about why community and seasonality are relevant in our lives today. EU Toy Safety Directive - No warning

Native Californian Nancy Singleton Hachisu has lived with her Japanese farmer husband and three sons in their traditional Japanese farmhouse for the last 27 years in rural Japan, where she served as leader of a local Slow Food convivium for more than a decade. Her first book, Japanese Farm Food (Andrews McMeel, September 2012), was praised in the New York Times, London Times, the LA Times and more. TBS and Fuji TV are currently documenting Hachisu's preserving and farm food life in rural Saitama as well as her visits to artisanal producers in more remote areas of Japan.