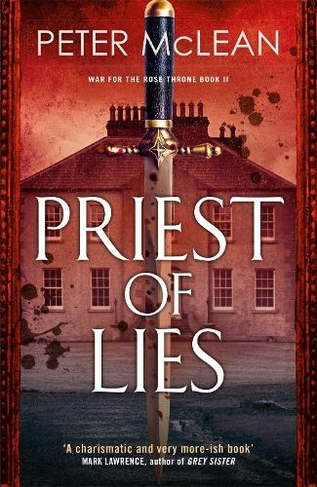 Priest of Lies: (War for the Rose Throne)

By Peter McLean (Author)
Paperback
https://www.whsmith.co.uk/products/priest-of-lies-war-for-the-rose-throne/peter-mclean/paperback/9781787474277-12-000.html £8.19 rrp £9.99 Save £1.80 (18%)
GBP
Availability
In Stock
Free Delivery Available When You Spend £25 Or More
Details
Spend £25 on eligible products to receive free standard delivery to home or free next working day click and collect to store
Share

'Peaky Blinders with swords' (Barnes & Noble), perfect for fans of Mark Lawrence and Joe Abercrombie. 'The poorer and more oppressed people are, the weaker they become - until they just refuse to take it any more. Then they will rise up, and the gods help their oppressors.' When Tomas Piety and his Pious Men returned from the war, he just wanted to rebuild his crime empire and look after his people. But the sinister Queen's Men had different ideas and whether he likes it or not, he's now a spy as well. Now, half the city of Ellinburg lies in ashes and the webs of political intrigue are stretching out from the Queen's capital to pull Tomas in. Dannsburg is calling. In Dannsburg the nobility fight with words, not blades, but the results are every bit as bloody. In this pit of beasts, Tomas must decide once and for all whether he is truly the people's champion . . . or just a priest of lies. And as Tomas' power grows, the nobility had better watch their backs . . .

Peter McLean was born near London and grew up in the Norwich alternative scene, alternating dingy nightclubs with studying martial arts and practical magic before settling to a career in corporate IT. His first novels, the Burned Man series, are noir urban fantasy.