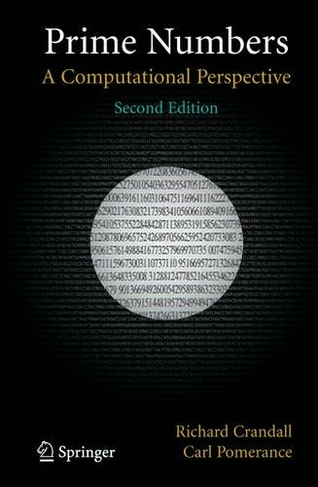 By Richard Crandall (Author), Carl B. Pomerance (Author)
Paperback
https://www.whsmith.co.uk/products/prime-numbers-a-computational-perspective-softcover-reprint-of-hardcover-2nd-ed-2005/richard-crandall/carl-b-pomerance/paperback/9781441920508-12-000.html £89.99 rrp £99.99 Save £10.00 (10%)
GBP
Availability
In Stock
With Free Standard Delivery To Your Home Or Store
Details
Spend £25 on eligible products to receive free standard delivery to home or free next working day click and collect to store
Share

Bridges the gap between theoretical and computational aspects of prime numbers Exercise sections are a goldmine of interesting examples, pointers to the literature and potential research projects Authors are well-known and highly-regarded in the field 4 Tables, black and white; XV, 597 p.

Richard Crandall currently holds the title of Apple Distinguished Scientist, having previously been Apples Chief Cryptographer, the Chief Scientist at NeXT, Inc., and recipient of the Vollum Chair of Science at Reed College. His primary interest is interdisciplinary scientific computation, though he has authored numerous theoretical papers in quantum physics, biology, mathematics, and chemistry, as well as various patents across engineering fields. Carl Pomerance received his Ph.D. in mathematics from Harvard University in 1972. Currently he is a professor at Dartmouth College. A popular lecturer and winner of the Chauvenet and Conant Prizes for expository mathematical writing, Pomerance is well known for his research in computational number theory, his efforts having produced important algorithms now in wide use.