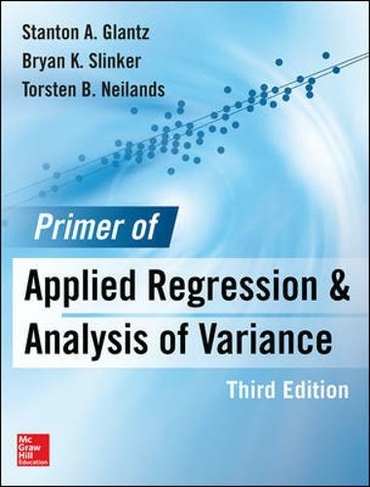 Also available on eBook for £133.42. Click here to purchase from Rakuten Kobo

Publisher's Note: Products purchased from Third Party sellers are not guaranteed by the publisher for quality, authenticity, or access to any online entitlements included with the product. A textbook on the use of advanced statistical methods in healthcare sciences Primer of Applied Regression & Analysis of Variance is a textbook especially created for medical, public health, and social and environmental science students who need applied (not theoretical) training in the use of statistical methods. The book has been acclaimed for its user-friendly style that makes complicated material understandable to readers who do not have an extensive math background. The text is packed with learning aids that include chapter-ending summaries and end-of-chapter problems that quickly assess mastery of the material. Examples from biological and health sciences are included to clarify and illustrate key points. The techniques discussed apply to a wide range of disciplines, including social and behavioral science as well as health and life sciences. Typical courses that would use this text include those that cover multiple linear regression and ANOVA. Four completely new chapters Completely updated software information and examples 110 Illustrations, unspecified

Stanton Glantz is Professor of Medicine and Director of the Center for Tobacco Control Research and Education at the University of California San Francisco, where he conducts research on tobacco control and cardiology. He is author or co-author of over 300 scientific papers and nine books in addition to Primer of Biostatistics, 7th ed. (McGraw-Hill, 2012) and Primer of Applied Regression & Analysis of Variance, 2nd ed. (McGraw-Hill, 2001). He wrote the first major review (published in Circulation) which identified involuntary smoking as a cause of heart disease, and the landmark July 19, 1995 issue of JAMA on the Brown and Williamson documents, which showed that the tobacco industry knew 30 years ago that nicotine is addictive and that smoking causes cancer. His work has attracted considerable attention from the tobacco industry, which has sued the University of California twice (unsuccessfully) in an effort to stop Professor Glantz's work.